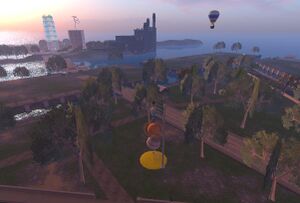 Bay City, introduced in the first half of 2008, was the latest block of city style sims. West of Nova Albion, Bay City has appeared as an attractive addition to the continent of Sansara on the main grid. A duplicate is also created for Teen Second Life, and has been merged with the Sansara land mass with the integration of same.

Bay City is reachable via standard teleport, or on the main grid by sailing the Straits of Shermerville, or traveling Route 66 from the Ahern or Nova Albion infohubs.

Bay City was first announced by Blue Linden in the Second Life official blog on February 22, 2008. Created by a set of resident builders known as "moles" within the Linden Department of Public Works, the area was described as "the American urban experience, between 1940 and 1965, perhaps best typified by Chicago circa 1950 and marked by a distinct deco influence." A "prerecorded statement" from Governor Linden further stressed the theme.

"We hope that the Residents of this new city will produce interesting and attractive structures, in styles appropriate to the period 1930 to 1960 when most of our buildings were erected. In any case, the Residents of Bay City will form a unique and bustling community."

The Bay City sims opened for initial viewing on May 8th, 2008, with auctions on various Bay City parcels beginning roughly two weeks later. The initial auctions were sold for greatly higher than average prices, due largely to speculation on the part of so called "land flippers." Some chose to create builds outside of theme in order to "land grief" and/or to flaunt the "official" theme. Much of this issue has since calmed down considerably, though Bay City remains some of the most valuable virtual land on the grid.

A "content package" was released on May 24th, 2008, shortly after the first initial builds began to appear. In it were textures and finished items to help new residents in creating a themed build. Additional content packages, including several prefab buildings, were released in the Spring of 2010. These content packages are available in the port authority building in Inner Harbor and at the Bay City Municipal Airport atop the Local Information desk.

Moose Beach became an official infohub on April 14, 2009. The Bay City Municipal Airport in the Hau Koda region -- with a theme chosen by members of the Resident group called the Bay City Alliance -- opened as an additional Bay City infohub on June 25th, 2009.

A further addition to Bay City was a flexible event space, the Bay City Fairground, which was added in January of 2010, with its first major event -- a flea market -- held in March of 2010. Likewise, a Bay City Alliance headed project brought names to the main streets throughout Bay City in March 2010.

Bay City celebrated its 2nd anniversary on May 16th, 2010 with a parade at noon SLT, and party featuring three live musicians: Christov Kohnke, Edward Kyomoon, and AM Quar in the fairground beginning at 1:30 p.m. SLT.

In August 2010 the Bay City Center project was announced, for placement in Daley Bay. Initial placement of the Center was on September 22, 2010, with final completion pending.

With the integration of the Teen Second Life landmass into the main grid in January 2011, their Bay City was placed adjacent to the main grid's version. LDPW Moles began to replace some of the duplicated content, and abandoned teen grid parcels were re-auctioned. New content includes a boardwalk amusement park and aquarium complex in Oak Bay, Oak Bluffs, and Weston, as well as some rail improvements in Owens Beach.

Bay City celebrated its 3rd anniversary on May 14th, 2011 with a parade at noon SLT, and party featuring three live musicians, JoeUSA Shelbyville, Christov Kohnke, and Yaro Pinion, and one DJ, Marx Dudek, in the fairground beginning at 1:30 p.m. SLT. Roughly 60 avatars marched in the parade.

A 4th anniversary parade was held on May 20th, 2012, followed by a party at the Fairground. The Hairy Hippo Fun Land officially opened that same day. 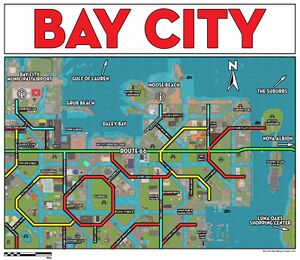 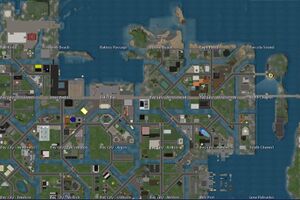 The following regions were created for Bay City on the Main Grid in May 2008.

TG Bay City regions, total of 20 sims, arrived on the Teen Grid on 11th May 2008. TG Bay City opened to Teen Residents on 13th May 2008 at 11am SLT and land was $1/m2 for a few months after opening. With the integration of the Teen Grid, these joined to the main grid regions above. It is popularly referred to as Bay City Westside by local Residents. 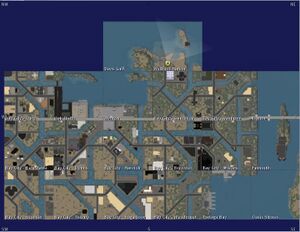 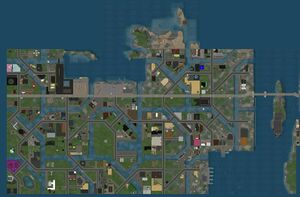 The Bay City regions had different names in Teen Second Life, as follows. 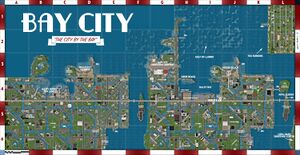 When the Bay City regions were merged into a single land mass, a small number of additional regions were added. These include the following.

Bay City has several LDPW designed location, including two infohubs, a bowling alley, a theater, and a yacht club. Each adds a unique character and flavor to the Bay City regions, as well as a home for machinima festivals and other events. Many of these are deliberately low prim, in order to allow for the doubled prim allotment on Resident-owned parcels in the city. some of the major locations include:

Constructed in 2010, the Bay City Center is the "landing point" for people entering Bay City who wish to explore the area, as well as a permanent meeting place for the Bay City Alliance. Come here to learn more about Bay City, or just to pick up a few goodies!

This site, sitting in the North Channel region, serves as a flexible event space managed by Linden Lab and the Bay City Alliance. Bay City Fairgrounds officially opened on 25th March 2010 with a special ribbon cutting event at 12pm PST. Planned events for this space include the city's annual flea market as well as its anniversary event held in May.

A industrial Railway line around the Inner HarborD area extending along a few sims to the North. There are 2 rez zonesD for you to rez your train. The Bay City Harbor Railway is based on the Second Life Railroad standard but with phantom center guides.

Built after a poll of Bay City Residents, the Bay City Municipal Airport in the Hau Koda region is a "vintage airport" featuring all the amenities of a 1930s era air strip. As well as a sizable waiting area, one will also find a travel agency, a malt shop, a newsstand, a luggage and perfume store, and even an upstairs bar. Powder rooms, also located upstairs, allow for semi-private adjustment of avatars. Outside of the terminal, once can find a hangar, runway, control tower and even signal light. Finally, a small, secluded park sits to the Northeast corner of the region. A group, Bay City ATC, handles runway to tower communication for Bay City's runway 9.

Bay City Municipal Airport also serves as one of Bay City's two infohubs. Due to a server glitch in this infohub's earlier days, all residents without home locations were appearing at this infohub, leading to a sizable amount of overcrowding. This was fixed in Second Life Server 1.32.

Designed to mimic the glory days of cinema, the Bayjou Theater was designed as a place to showcase machinima. The theater is currently managed by Linden Lab and a representative of the Bay City Alliance, and presents new films every hour, as well as showcases, openings, and even classes on machinima creation. A group, the Bayjou Film Preservation Society has been provided for information about this location.

Initially planned as a possible location for poetry slams and other events, Cafe Deco simply serves as a decorative location at this time.

Sitting on the Channel Island between Bay City and Nova Albion, this location served as one of the locations for Linden Lab's Halloween events in 2009.

Rides, attractions, and interesting foods at the amusement park! Ride the Lollercoaster, try the cotton candy, avoid heatstroke! The Weston and Oak Bluffs regions are dedicated to slightly-grubby fun!

A bowling alley located in Bay City - Handa along Route 66, Hot Balls had been planned for bowling events, including a possible "league night." It is now used simply for "drop in" bowling. This location was only known as "Hot!" on the Teen Grid, and featured a modified sign.

Built on the ruins of a condemned asylum -- which was built on an old cemetery -- built over a cursed sacrificial altar -- built at a charming bed-and-breakfast -- built on a small island. Is it any wonder that this hotel went out of business? It's rumored to be haunted! It's in the Falmouth region, of course.

A seaside getaway, featuring Squishybottoms Rock and Roadhouse, a one-planned live music venue, a faux restaurant called Scales 'n' Tails, and a charter house, Moose Beach now serves as one of Bay City's two infohubs. Due to a server glitch in this infohub's earlier days, all residents without home locations were appearing at this infohub, leading to a sizable amount of overcrowding. This was alleviated with the opening of the Bay City Municipal Airport/Hau Koda infohub, and fixed in Second Life Server 1.32.

While initial plans may have seen the New Port Yacht club as a community hangout, it became a Linden Lottery location. Additional information about that be found on the New Port Yacht Sales Lottery page. The area is now a Resident marina and event space. You can contact the Bay City Alliance for more information.

A rail trolley follows Route 66 west from Bay City - Molesworth. A set of water trolleys meander through the canals.

Several other locations can be found throughout Bay City. A list of LDPW sites in Bay City, and SLURL to each, can be found in the LDPWs Parks and Recreation Directory. Many other unnamed parks and squares can be found around the city, making Bay City a perfect city to explore by foot or in a vehicle.

You will find additional information on Bay City at the following external links.