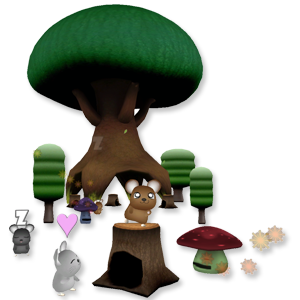 Snuffles are an incredibly popular breedable animal in Second life.

One of the most popular pastimes in Second Life is the caring for, feeding and breeding of virtual animals in Second Life. Over the years these animals have developed and a whole community of breeders and traders has emerged. Some players become so good at breeding animals that they are able to earn linden dollar profits from the buying and selling of them.

Most aptly described as hamster/rodent/squirrel type createures, Snuffles are probably the most popular breedable animal in Second Life. With hundreds of players actively breeding them there is a huge secondary market that has emerged in the breeding and trading of Snuffle Burrows.

Uniquely Snuffles were the first major breedable to support the new pathfinding navigation system. This meant that they were able to explore sim environments in a more dynamic way while at the same time generating significantly less lag due to reduced script processing and collisions. This was a significant problem as many landowners banned the movement of breedables in the past because of the amount of sim lag caused by them.

Amaretto Horses were one of the most popular breedables in Second Life. There were many breeders who bred different coats and appearances of Amaretto Horses and some used to become quite rare and traded at quite a high value. In 2010 they were taken to court by the founder of Ozimals over an intellectual property dispute. In 2012 a judge issued a summary judgement on the matter.

Ozimals were a popular breedable rabbit in Second Life. In 2010 the founder took Amaretto Horses to court over an intellectual property dispute. In 2012 a judge issued a summary judgement on the matter.

Wildwood Kitties were a popular type of breedable cat in Second Life.

Krafties were a popular type of combat pet. Krafties allow you to fight against different owners and craft items.

Fennux were a type of combat pet in Second Life.