This article describes how to create your own HUDs. For basic information about HUDs, see Heads-up displays (HUDs)

It is easiest to keep the root prim rotation at <0., 0., 0.> while building. That way, you can know that the west side of the object will be the one facing the screen when attached. For a box prim, that is face 4.

Since an update about 2012 (SH-2646), HUD attachments are always rendered as full bright.

Prim alpha and texture transparency work as expected. If you want your HUD to be totally transparent, consider making only the front faces that way. The flat projection will keep the other sides hidden, and it will be easier for residents to find the object if accidentally dropped or forgotten on the ground.

HUD objects will capture mouse clicks, even on their transparent parts. If you are using a round interface element, a cylinder would not be a bad choice of prim, so it does not use more space than it needs.

Shiny works on the HUD, this can help to give an almost-3D appearance to some shapes, like spheres or sculpts. Not everybody enables shiny, so textured shading could still be your best bet.

Most scripted functionality works with HUDs. They mostly work like any other attachment, but there are some special exceptions. A page with an HTML_HUD_Demo can be found on this wiki as well. 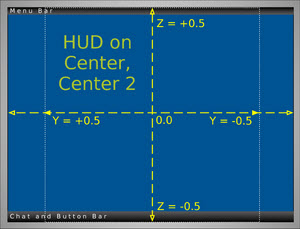 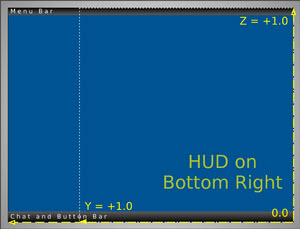 HUD attachments are rendered with an orthographic projection, meaning that everything looks flat and there is no perspective. The objects are still 3D, and they can move in XYZ space and be rotated.

In HUD space, 1 meter is the height of the viewer window, including the menus and tool bar. The (0,0,0) position depends on the HUD attachment point. For the Center and Center 2 points, zero is the center of the screen. For the four corner HUD points, zero is that corner of the viewer window. Zero for the top and bottom is centered on the window, again hidden behind the menu or toolbar. There is no way provided to learn the width of the viewer window, or the pixel dimensions. (The FindScreenWidth script example can return the display width on touch, if the attachment is on one of the corner HUD slots.)

If "Move & View>Automatic position for: Sidebar" is checked, the HUD coordinates will automatically be scaled to exclude the sidebar when it is open. If this feature is unchecked, the entire window width is used regardless. (Some third party themes may ignore this setting.)

Since HUD attachments cannot be clicked through even if they're invisible, the common solutions to getting them out of the way are moving, shrinking, or rotating.

Use llGetLocalPos() to learn an attachment's position on the screen, llSetPos() to move it. (llGetPos() looks tempting, but for attachments that tells us the avatar's position.)

This example moves the HUD away from the wearer, possibly behind other HUD attachments: