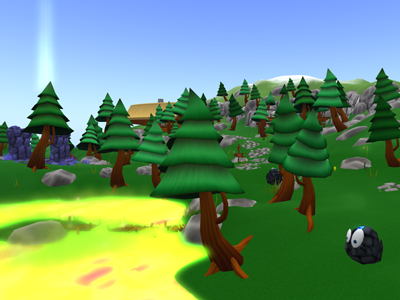 The Linden Realms are a great way to earn linden while having fun exploring some beautiful fantasy sims. 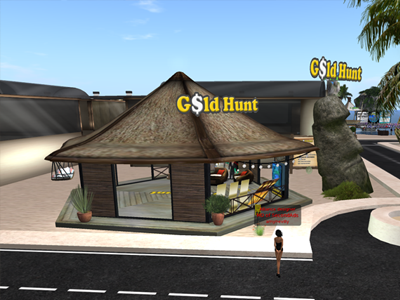 The Gold Hunt game allows you to earn linden by searching for coins around the grid. It's a great way to explore the grid and take you to new places. 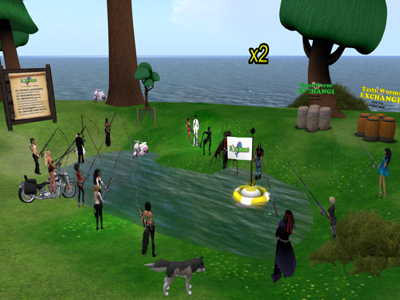 The Fish Hunt game is a great way to meet other players and compete. It's also really popular with players with disabilities as its very easy to play. 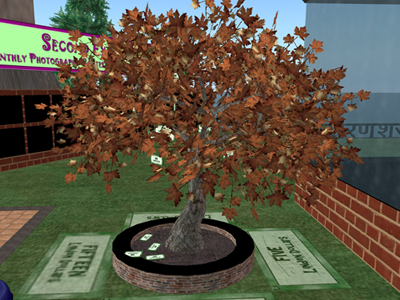 Money Trees are a great way for new players to earn linden by picking linden from trees around the grid. Older players aren't allowed to use Money Trees. 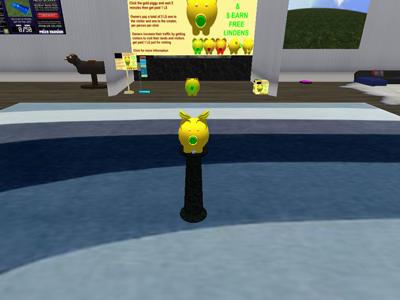 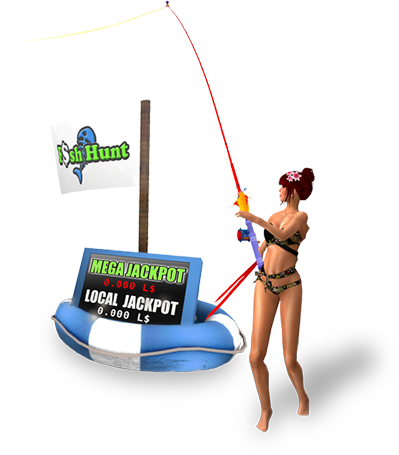 Fish Hunt game is by far the biggest and most successful fishing game with thousands of active players that earn L$ by fishing. 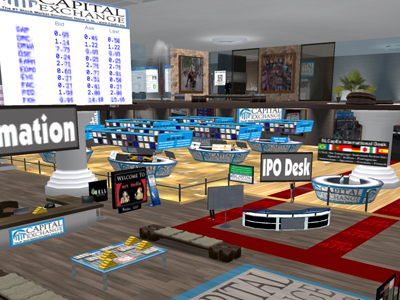 The Capital Exchange allows you to invest and speculate on virtual companies in Second Life. 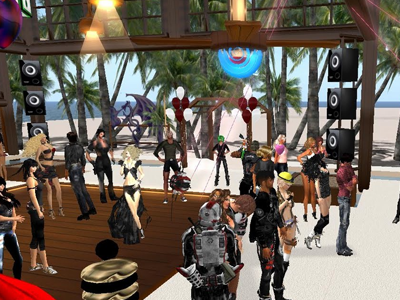 Sploders are a way of earning small amounts of linden when out at a club or party. They are a good way to meet other players and get chatting. 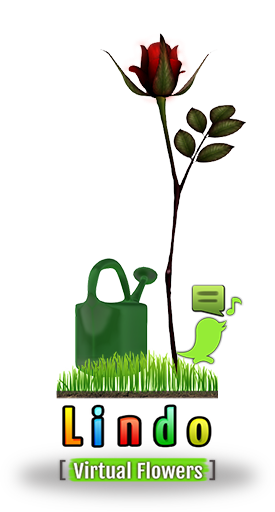 Lindo allows you to earn linden for growing virtual flowers.

Second Life is full of opportunities to earn Linden Dollars, but it is also important to have fun while earning. Some players make the mistake of thinking that they have to do something they don't enjoy to make money in Second Life. That's simply is not the case.

Sometimes it can feel overwhelmingly challenging to earn linden in Second Life, but with the right information to hand and some ample determination you can make money.

Get Paid a Weekly Stipend

Buy Linden on the LindeX

You can buy linden whenever you want on the LindeX exchange. However, there are billing and trading limits.

The following games are run by ADS, the leader in earning linden games. The Goldtokens.net Gaming Network was a community created by SecondAds company with the goal of helping new players earn their first linden dollars. It's not just for new players though. Thousands of experienced players enjoy competing for leaderboard positions and earning large sums of linden in the process.

The Gold Hunt allows players to earn linden and win random gifts by hunting for coins and gems that are hidden by landowners. There are literally 1,000s of lands with coins available right across the grid, which can be discovered by using the player HUD.

The Fish Hunt allows players to earn Linden and win Random Gifts by fishing. There are literally 1,000s of lands with fish buoys available right across the grid, which can be discovered by using the player HUD. You'll also need to get a free beginner fishing rod too.

Farm Frenzy gives land owners the opportunity to earn linden by farming worms for use in the Fish Hunt. It takes time to develop your Farming Experience, but eventually you'll be able to dominate the farming industry and sell your produce to the masses. Fortunes have been made in the farming industry!

The KingdomsAndEmpires.com is a new web browser strategy and trading game developed by ADS. Its theme is medieval. Players can grow wheat and mine for iron ore to produce wheat and iron ore that they can trade and use to build a stronghold out of their settlement. Players can get free materials every day by logging into K&E site and collecting their taxes. While playing players gain K&E points which are converted to L$ earnings daily.

The Noob Hunt is an affiliate recruitment scheme for the Goldtokens.net gaming network which allows players to become masters and recruit apprentices for the various games hosted on the network. In return they earn a percentage of each of their apprentices' winnings. You can also sell your apprentices to other masters on the exchange.

Bletaverse company have a number of ways of earning linden such as waiting at traffic cones and they also run a social network that players can get involved in.

Lindo Virtual Flowers is a simple and cute game where players water a growing flower via HUD to earn L$. They do so in areas designated by landowners to have a "sun" which enables the flowers to grow. The HUD also includes a random location teleporter to find these areas quickly and easily.

The Dragons & Princesses is a cool game developed by Earn2Life company that allows you to earn linden by hunting for voids on different lands around Second Life.

PaleoQuest is a massive game created by Linden Lab and its busy team of Moles. Spanning six regions, it gives you a chance to explore the ancient tombs of Egypt, dodge the Loch Ness monster, search for pirate treasure, repair a damaged communication satellite, and get a DNA sample from a sleeping Tyrannosaurus Rex in the Caves of Talpa. There are perils and treasures along the way and prizes to win if you survive.

The Linden Realms were created by Linden Lab and are designed with a beautiful environment that has trees, cliffs, and lots of fun places to explore. You can use a teleporter to visit different areas of the Linden Realms. Each place has different quests and other activities that are fun and exciting to do. There are rock monsters that you will have to run away from and pools of toxic water to avoid.

Money Trees were created by Wolfhaven Productions and allow players to earn linden by plucking dollar bills and other game items from trees that are planted in sims all around the grid. There is a HUD you can wear to tell you where to find new trees. However, many trees are age-limited, so only very new players can use them.

Gold Piggy Hunters was created by Kaitlin Rayna. Earn Free Lindens by clicking the gold piggy and teleporting around visiting locations. Click the gold piggy and wait 5 minutes then get paid 1 L$. Owners pay a total of 2 L$ one to the visitor and one to the creator per person per click. Owners increase their traffic by getting visitors to visit their lands and visitors get paid 1 L$ just for visiting.

SuperFish was created by Shag Lane. SuperFish is a not for profit fishing game with minimum commission taken from landowners willing to host SuperFish buoys. All game objects are free with the aim of creating a fairer way for landowners to attract traffic and fishers earn.

A large proportion of players have some form of Second Life Job as a means to earn linden. This can be a rewarding way to earn linden and if you have the right ideas you can even become an entrepreneur and start your own business.

There are a wide range of devices that allow you to make money via certain activities. In the order of decreasing interactivity these are:

There are a wide range of skill game machines where Linden can be earned. While these games may resemble real-world casino game machines, they should all comply with Wagering policy and Skill Game Compliance.

There are a wide range of Chat Sploders such as the ever popular Chatsploder Network available in various clubs and other areas. These allow you to earn linden by waiting for the 'explosion' which may take quite some time. In the mean time you can chat and make new friends.

These are devices where players first make contributions to an aggregated pot. Once the pot exceeds a threshold, a countdown to an 'explosion' begins (such as 3 mins) during which further contributions are typically still accepted. At the 'explosion' the pot is randomly distributed between contributors. UPDATE: Be aware of LL's wagering policies as paying to win on a game of chance such as a sploder or lottery can be interpreted as a violation. There are free sploders which are used to generate traffic that cost nothing to play which are legal. Wagering policy and Skill Game Compliance.

These allow you to earn Linden or prizes for camping, e.g. sitting chairs or touch Sploders, which you have to touch to begin a countdown to an 'explosion' at the end of which a landowner's pot of money is randomly distributed between touchers. Some of these devices have you earn Linden, others have you earning other things such as new skins, clothes or other virtual game items. All you have to do touch them or sit on them, then continue camping on them (or reasonably close to some others) for the required amount of time to earn your prize. While some opine it is the least fun way to earn Linden ever invented due to lack of interaction with these devices during the camping time, others argue that it is just as much fun as any other activity, because while camping you are still free to chat and make new friends. A further advantage is that it is a relatively simpler way that does not require much time or physical input, and is therefore quite suitable for people with disabilities.

These are similar to camping devices above, except that you simply need to be present on the land within a certain proximity of the device for the required amount of time to earn your prize, which is typically awarded to a resident chosen at random. These include Random Money Givers, and sometimes require that you become a member of the group owning the land, or add the land to the list of your SL Picks in order to be considered for an award.

It is possible to earn linden by completing surveys, surfing websites or filling web offers. Unfortunately this can be very haphazard and you may not receive payment if you don't fit the demographic that the company is looking for.

If you have some capital to invest you can simply invest in one of the companies listed on the Capital Exchange and then hope to earn dividends over time. You can either try to earn Linden by making a long term investment, or you can speculate on daily market movements.

Please share your external sites and articles here with information on how to earn linden dollars in Second Life here: