NOTE: This is an official Second Life API provided and documented by Linden Lab. Its use is subject to the API Terms of Use.
Second Life APIs
Unofficial APIs

The Second Life Map API is a JavaScript library to embed Second Life maps onto your web pages. It's a purely client-side JavaScript API. If needed, you can also directly access the map images.

NOTE: This API is still in beta. URLs and API signatures may change. See the Release Notes for information on new features and known issues.

The Map API enables you to create web pages that have web map functionality, using maps of Second Life, rather than Earth. In general, the default map interface looks as shown here. 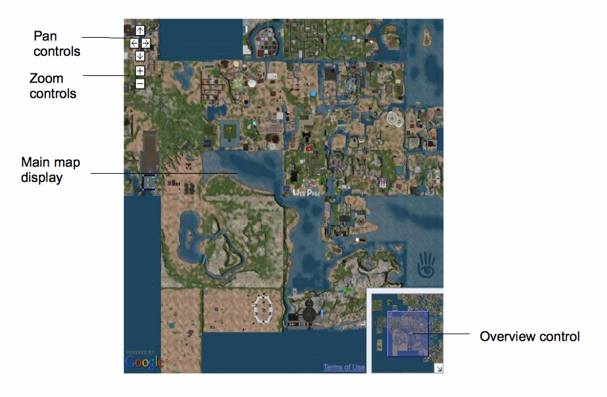 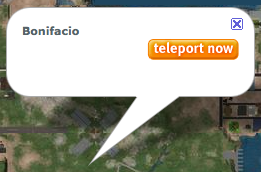 Clicking anywhere on the map opens a popup (left) where you click. Click "Visit this location" to start the Second Life Viewer & teleport you where you clicked. This feature is implemented with the gotoSLURL() global function.

See Map API Basic Examples for a detailed explanation of the working examples at http://maps.secondlife.com/examples/.

The web site uses the Map API to provide a mechanism to teleport directly to locations in Second Life from web pages.

Include the API files

To use the Map API, put the following lines at the beginning of each HTML page. This includes the JavaScript & CSS so that you can create the map & display it correctly.

All the examples also require additional script statements in the HTML header.

You can also include your own stylesheet to style the other elements of your page. For example:

The Map API has been tested to work with the following browsers:

Other browsers may work but little issues may appear. Unless otherwise noted, all features work in all supported browsers.

If you encounter problems or bugs or have feature requests, please email webmap@secondlife.com.

The Map API is built around the Leaflet web map library. Leaflet provides many options, methods & events for customizing the presentation of your Second Life map.

Map coordinates are based on the Second Life grid system for positioning regions. 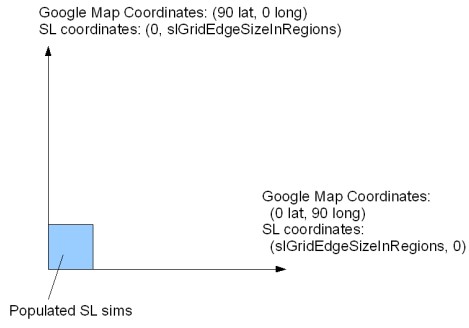 As illustrated in the diagram above, the Map API maps the Second Life world to the upper right quadrant of an earth map. A large scaling value equal to 220 or 1,048,576 defines the largest region coordinate at the top and far right edge of the displayed area. This value creates a map area with room for one trillion sims.

The little blue square illustrates where the populated sims are in Second Life.

Even zoomed-in tiles are addressed by their region coordinates. That is, tiles with zoom greater than 1 are stored by the x & y of the regions at their lower left corners. You can find the zoom tile containing region (X,Y) for zoom level Z with the filename map-Z-X'-Y'-objects.jpg where:

Note that 2Z - 1 is the number of regions encompassed by the width of a tile at resolution Z.

These four region tiles are compressed into the single tile:

The following shows the map zoomed all the way out, showing the once-entire Second Life world view: http://map.secondlife.com/map-8-1024-896-objects.jpg

The following displays a single tile contained in the view above, zoomed all the way in: http://map.secondlife.com/map-1-1027-1019-objects.jpg

The map generation process is more scalable than the previous release, and is able to image the entire Second Life grid of about 30,000 regions in less than two days.

There is a "decay period" for offline regions. If a region is disabled, the tile will stay up for several days (in case it comes back or something else has gone wrong) before the tile disappears. That several-day period will be longer than the time it takes to update existing regions or put new regions on the map.

Getting a map URL from LSL

The following LSL script illustrates how to display a map of the current region to an avatar:

This section describes new features and known issues with the current release of the Map API.