One of the infrastructure tools that we've identified for the future internal architecture of Second Life is messaging. Message queuing systems allow systems that send messages to not have to worry about how they will be delivered, and allow consumers of messages to gather whichever ones interest them, at their own pace.

Ideally we'd have a completely scaleable system that clients could treat as singular black box. It would act as a well-known cluster to which senders or receivers of messages could connect, and be able to communicate asynchronously to or from anywhere else on the grid. Unfortunately it seems as though this dream, like so many others, is unattainable by any currently available software. We investigated around 15 open source systems that were explicitly designed for message queueing and found that none of them achieved this ideal.

Our use cases mostly involve very large numbers of queues; the smallest number we're even considering is double the number of concurrent users. Our largest use case would be of the same order of magnitude as registered users. This means that we have to plan for millions, and probably tens or hundreds of millions, of message queues, since we want whatever system we choose to last us until then. Pretty much all of the message queue systems we investigated are intended to maximize message throughput rather than number of consumers. The clustering that they implement mainly serves as additional horsepower to deliver more message throughput. In particular the clustering we've seen replicates all state to every machine in the cluster, meaning that the cluster cannot add queues beyond the capacity of an individual node. In order to have a solution that scales in terms of number of queues, each node will have to be able to contain a subset of the global state -- it actually seems as though such a message system would want to be coupled with a distributed storage system.

In any case, given that we expect that we'd have to develop our own queue scaling solution that involves partitioning, which may or may not be a task we are interested in taking on, the strongest candidates are RabbitMQ and Apache QPID. Both are mature products that support AMQP (though they support different versions). Both have strong vendor support, and both have good single-host performance numbers. There is some more investigation to be done -- we'd like to know their true maximum capacity when clustered, to evaluate whether it's worth clustering at all, given that we have to implement partitioning ourselves anyway.

We're unfortunately pretty far from having closed the case on which technology to choose, or even if we can use any of these at all. Investigation will continue!

The major use cases that we believe could be implemented with message queues are these:

Many other uses that we haven't put up there would arise when developing various applications. Note that we do not intend to expose the message queue system directly to the viewer; we would use it instead for behind-the-scenes implementation of the above use cases. Discussing the protocol by which the viewer sends and receives messages with the server is far outside the scope of this research.

The primary use case that we examined was that of group chat. This is the most obvious use that we'd put message queues to, and it's also one of the only use cases up there that is a current pain point for Residents. Here are some numbers describing group chat, which were captured at 11am one day:

Please note: this data was measured some time ago, and every value you see has increased by today, and will continue to grow for the forseeable future. It was not enough for us to pick a technology that could just barely handle the current load; we have to pessimistically assume that whatever we pick will be used for many years hence, and will therefore have to deal with at least an order of magnitude more of everything.

Our minimum hurdle for a platform is 4x the above values, and ideally could horizontally scale nearly infinitely across the most important axes to us: number of group chats, number of memberships, and messages/second.

Group churn represents the number of groups added or removed from the system every second. In an AMQP-based system a "group" would be added when someone binds the first queue to the a key representing the group's id, and the group would be dropped when the last binding to the key is removed. In any routing system of this nature, there will be two data structures that are the inverse of each other: one is queuename->keys table and the other is the keys->queuenames table. Group churn would primarily affect the keys->queuenames table.

Membership churn comes from agents joining and leaving groups, and is indirectly related to group churn. There is vastly more membership churn because each agent is in roughly 9 groups -- one agent logs in for 15 seconds and then logs out, that's 18 points of "churn". In an AMQP-based system this churn would be visible as bindings being added and dropped, which would thus affect the queuename->keys table.

Both types of churn are substantially higher than messaging rate. Even if we successfully implement a feature that will allow residents to opt out of joining group chat on login, I'd guess that we'd see at most a 75% reduction in churn as a result, which would still leave membership churn nearly an order of magnitude larger than messages sent.

The group size metrics are interesting because it implies that most groups are pretty small. The downside is we have roughly 2 unique groups for every concurrent resident, so our group system has to scale along that axis very well.

Overall, these numbers are a real whack upside the head because they reveal that for our particular use case, we worry far more about number of queues, and ability to handle high churn, than we do about message delivery rate. Most of the benchmarks regarding the software we evaluated optimize for message rate rather than churn or quantity of queues.

Note that Twitter has a similar set of requirements (complete with startlingly low message rate), though they don't have such tight latency requirements as we do.

Given that we haven't found any system that provides seamless scaling along the axis of queues, we have come up with some designs for how the system could be partitioned. Any partition scheme is a bit of a downer because then the clients have to know about the partitioning. 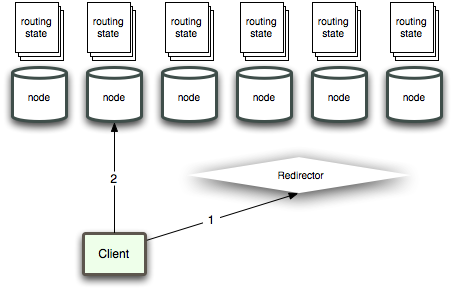 This system has the property that each client will be talking to as many slices as routing keys of interest (proportional, anyhow). This may be acceptable for an application where there's only a finite number of routing keys that any particular client may be interested in (such as group chat, where there's an upper limit on the number of groups a resident may be in).

We could cut down on the sheer quantity of connections by using clustering to reduce the number of slices. The messaging technologies we looked at support clustering in a way that would allow us to create clusters of 2-3 nodes that have roughly 1.5-2 times the quantity of queues as a single node. This would be a more complex system than not using clustering at all, but it would reduce the number of slices, and thus connections, by a factor of 1.5-2, which may be important. 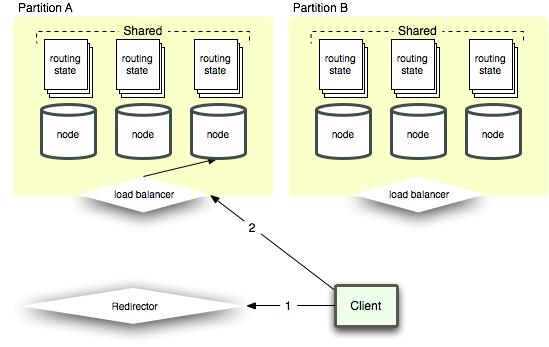 AMQP is a developing standard that is aimed pretty squarely at our use cases: high-performance, flexible, message routing and delivery. The standard is being iterated upon and is not finalized yet. This is a risk factor because it's a moving target and all current editions are mutually incompatible -- the 0-10 edition is nontrivially different from 0-8, and I've read some rumors that the next edition removes or changes some of the core concepts in a dramatic way.

We believe that AMQP is the appropriate standard for our use cases; therefore we investigated the AMQP servers much more heavily. Here's a decent example of how to apply AMQP to a particular use case (with emphasis on Rabbit).

RabbitMQ is already installed in our image and is currently being deployed by the data warehousing team (Ivan in particular) to handle syslog message delivery.

QPID is sort of a compilation project from Apache. They have a pile of clients, and two brokers that each support different versions of the AMQP standard. The C++ broker appears to be where the good stuff is at. Installing it was not difficult -- it only required a few additional Boost libraries to be installed.

http://xmpp.org/extensions/xep-0079.html Message queue extension, available for ejabberd via this patch.

The AMP extension is immature and has no client support -- we'd be going it ourselves if we wanted to use that. We might decide that we don't need the AMP extension's semantics.

Stomp is a message passing scheme that is tremendously simple. It kinda looks like HTTP, but it's actually even simpler. The simplicity is both a strength and a weakness.

There are stomp clients written in nearly every language; since the protocol is so simple it seems as if people write new clients whenever they encounter even the slightest problem with someone else's client.

JMS is a Java API for asynchronous messaging. In a charming bit of java-centrism it specifies the API that a java program sees, but not a wire protocol or anything like that; I can only assume that each client is intended to develop its own custom wire protocol for talking to the broker, but there isn't much information about this out there. Some of the clients that support Stomp or AMQP also support some subset of JMS, and presumably the JMS API simply uses Stomp or AMQP as the wire protocol. The development of the wire protocols have been influenced somewhat by the needs of JMS.

Products that have their own protocol. These are generally less interesting to us because they are already at a disadvantage relative to implementations of a particular protocol in terms of community size, possibility of paid support, and being able to replace them with a different implementation if the need arises. However, we still take these into consideration in the hopes of finding a diamond in the rough.

Persistent Message Queue, in Ruby though