In addition to Second Life, the main service that many thousands of residents log into each day, there is a second grid open to the public. This grid is known as the Preview Grid, or "Aditi" (in comparison with "Agni", the name we give the production Second Life environment). Aditi is where we test server software that is under development, or that will be coming to Second Life soon. After being dedicated to pre-release testing of the Havok4 physics code for many months, we are again beginning to use it for true server beta tests. It will give all of you a chance to test at the server software we're planning to deploy to Agni in the near future.

The Preview Grid is used for a number of different things. This means that there, much more frequently than in Second Life, you will find that as you move from one region to another, you will be moving to regions that are running a different version of the server software. To get the most of the Preview Grid, you need to know where you are.

Some regions have a "channel name" imprinted into the ground over and over again. If the ground texture doesn't make it obvious, look at "About Second Life" in the help menu. There, you will see a wealth of information about your own system, as well as about the server software that the region you are in is running. The image below shows you where in the help dialog to find the channel the region you're in is running. (Just to the right of that is the version.) 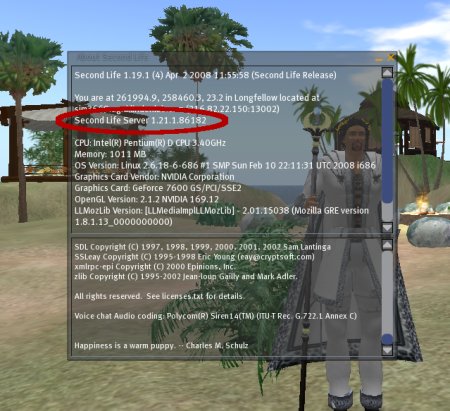 This will vary depending on the channel of the region, and on the state of the release. If you find problems in the "Second Life Beta Server" channel before that version has been deployed to the main Second Life service, please use our Issue Tracker to check to see if that problem has already been reported, and to report it if not. When reporting a problem, please give as much information as possible: what region you were in, exactly what you did and what behavior you saw, when it happened, and the version of both your viewer software and of the server software running in the region where you saw the problem.

In addition, there will sometimes be other channels for specific tests and/or early betas of upcoming features. Right now, there is:

You usually have two options for viewers:

Snapshot Date: Aditi uses a copy of the database from Agni. We refresh this database typically every few months. If your account is very new, you may not be able to log into Aditi. Once you do log into Aditi, you will have all of the inventory that you have at the time when you first log in. However, new items acquired in Second Life will not be available to your account in Aditi. In no event will you be able to transfer money or objects back from the Preview Grid for use in the production Second Life environment.