Abandoned land parcels are found on all large mainland continents. According to Gridsurvey, 13.4% to 14.2% of Mainland by area is abandoned parcels. Thinking that 49.0% of Mainland owned directly by Linden Accounts, about 37% of all mainland is in fact owned by residents.

Abandoned land is a parcel, from only 4 square meters to the size of an entire sim. It contains no objects, only unused land. If you move on an abandoned land parcel, you will notice that the parcel is owned by Governor Linden and that it is named 2013-06-09:Abandoned Land. So, the name also contains the data when land was abandoned. Sometimes, if you check About Land information, you might find additional information about the previous owner of that parcel. This is not a rule. Sometimes, the Lindens group abandoned land into larger parcel, try to sell it into an auction or sell a small parcel to a resident.

After being abandoned, land looks just like any unused parcel. All objects are sent to their previous owners. Then, after a while, the land becomes full of small slopes. The permissions (flying, script allowing, visibility or object rezz) usually remain unchanged.

Abandoned land has no ban lines or entity orb teleporters. Also, they have no teleport restriction. This is an important feature that allows residents to travel through large mainland continents in places without roads, with teleport or access restrictions.

Abandoned land can be purchased by auction, directly when it is for sale or via support ticket (see below).

Abandoned land is not found in the same amount on all continents. In places with a well-developed infrastructure (roads, railways, waterways), you will find only small parcels of land that is abandoned. In places with no infrastructure and no water access, used land is very rare. Also, Geographic features have a strong influence on the percent of abandoned land. Places with various ground textures, with mountains and not endless plateaus will always be inhabitated.

Corsica is an interesting continent by the fact that abandoned land has a very different repartition throughout the continent. It is much often found in places with no water access and no road access. Overall, Corsica can be considered an average continent in percents of used and unused land.

Gaeta 1 is the most unpopulated continent. Abandoned land is not so often found here because a lot of land was never sold and is still Linden-owned land.

Gaeta 5 has the record in abandoned land percent. It can easy be found in higher places of the continent.

Jeogeot has large percents of abandoned land. Population density is much higher near the coast, but decreases dramatically when you move to the center of the continent. Sims that have road access are usually more populated then sims wthout road sccess.

Nautilus offers a lot of water access, but also a lot of isolated sims. Usually, population density is high near the water. Higlands of Nautilus are always full of abandoned land. A high density of ban lines and entity orb teleporters block access between the shores and the highlands.

Sansara can be divided in two parts. The old part of Sansara is highly populated. Abandoned land is rare here. You will never find a whole abandoned sim, only small parcels. The situation is a lot more different in South-East of the continent, where many sims don't have infrastructure or water access. There, entire sims are abandoned. The transition is not directly between the two zones.

Satori is a continent with high density of abandoned land in places without road and water access, but abandoned parcels can easy be found near the roads.

Sharp Continent (the remaining of the Teen Grid) had a low percent of abandoned land. It was similar with old parts of Sansara in many points of view. Currently, since the teen population grew up, the continent is more depopulated.

Zindra is a special case. Abandined land is rare in some parts of the continent, mainly in Kama City. There are, however, parcels of abandoned land in many places without direct road or water access. More often, you will find unused land in Zindra, waiting to be sold or rented.

Other types of abandoned land

These types of land are not listed as abandoned land by Gridsurvey. In fact, these parcels are Unused Land.

In the Premium Continents abandined land doesn't appear that way. An abandoned parcel becomes owned by governor Linden and will be used when someone else needs a Linden home.

On rare ocasions, abandoned land is owned by other Lindens (for example, Guy Linden). This is usually when a sale or an auction will take place soon.

When somebody abandones private-owned land (not mainland), the land returns to the estate owner. Then, the owner can resell, rent or use that land in any possible way. Usually, private abandoned land looks like an empty parcel and with a note that the land is for sale or for rent. If the percent of abandoned land is too high, the owner might abandon the entire sim. In that case, Gridsurvey will report a new region down (closed).

Many land corporations own land on the large mainland continents. This land is for rent and sometimes for sale. Sometimes, this is a better solution then to own land, since the rent tier can be lower then the land tier. However, not all rental land is used, a large surface is not. If a resident decides to leave rented land, the land corporation might search for a new client to rent. If a large amount of land remains unused, then the corporation might abandon part of its land.

When an estate owner decides to abandon a sim (region) or no longer pays the tier for it, first thing that will be observed is that no avatar can teleport there. If you try to teleport to that location, you will receive a message that destination nt found. Then, on the map, at high resolution, that sim will still be visible, but you will no longer see its name. After a few days, it will vanish from the map at high resolution, but it will still be visible at low resolution maps. Finally, after more then a month, it wil no longer be visible on any online map.

How to abandon land

A much better way is to sell land, if you can. You can set your land for sale, you can contact nearby residents and groups that might be interested. For example, if you own land in Heterocera near a railway, you can contact the Virtual Railway Consortium group, maybe somebody wants land.

Think that if you abandon land and somebody else needs that land, it will be a complicated procedure to get land back. So, think about giving that land for free (if you don't want money). Use this when you allready found someone that wants land and sell the land to a specify person. If you sell your land for 1L$ but don't specify a person, you might have a big surprise. Many land corporations have bots (robots) that search after cheap land. When they find land, they buy it immediately. Think about the next real storry:

I owned a piece of land somewhere. Then, I decided to abandon it. I had a friend and I wanted to give him that land for 1L$. I didn't mention to who I will sell my land. He was there. It took only a second from the moment I set the land for sale until a robot came and both the land. We both were shocked and there was nothing we could do. However, later I found that my parcel was owned by a land baron and was for sale, at a much higher price. It remained for sale for about an year. Then, the land baron abandoned this land and it become abandoned land. The most interesting part is not this. When I lost my land, nearly all objects were returned except for an elevator that was moving on a skybox. When the new owner finally abandoned this parcel, I received my elevator. Think that my elevator was moving there for such a long amount of time and the new owner didn't know a thing about it.

Premium Continents don't allow land to be sold. So, the only solution is to abandon land.

A hard way to abandon land

To abandoned private or rented land, it is very simple. Just stop paying the fee and land returns to its estate owner. For an estate owner, to abandon land means to close/delete a whole sim.

How to purchase abandoned land

sometimes, the Lindens decide to sell parcels of abandoned land. These parcels can be seen on the map as yellow spots, just like any other parcel of land for sale. Price is always 1 L$ for square meter, even if the Lindens say that this is subject to change. Just go and buy that land.

Sometimes, abandoned land can be sold in land auctions. In that case, land is shown in violet on map.

Abandoned land, not for sale

In this situation, open a support case. Give as many informations as possible about the abandoned land parcel and why you decided to buy it. Usually, it takes about a week for the Lindens to give you that land. A good idea is, when you opened a support case, to be insistent and at every 2 or 3 days to write additional information.

The official knowledge base says that it is not sure if you will get a positive response and in some situations you will have a higher chance to get land:

In past, it was very easy to get abandoned land. Now, it is only a gift that you can get on very rare occasions. Most often, you will get the start of a land auction, with unknown results and only for a large surface. 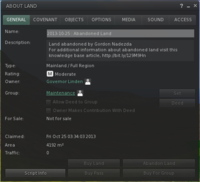 Sometimes residents don't change parcel name after purchase and they still are named Abandoned land - for sale. Also, some parcels look abandoned, but they are used. Many residents hold an empty parcel to increase number of allowed prims in another parcel. Always, check if the owner of that parcel is governer Linden.