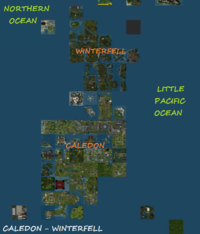 Based on information from several residents, Caledon - Winterfell is the oldest private continent still alive. The first sim was created in 2006 and since then new sims were added. Unclear informations about other continents exist, but there is no clear data. The form of the continent changed many times, the most important change was the conection between the two micronations that form it today. There also is unverified information about a third micronation that at some point existed in South. It is the only private continent with highly documented history.

Like the majority of private continents, Caledon - Winterfell is composed of a big number of islands. These islands don't form a tropical beach paradise. In fact, the beaches are almost absent. Water enters the land to form rivers and internal seas. The islands are sometimes flat and sometimes they host mountains and hills. Some parts are covered wth forests, some parts with grass and some parts host buildings of many types, from mysterious buildings of Winterfell to large cities of Caledon. Water channels are larger in Winterfell and sharper in Caledon.

Altitude map shows that overall altitude is not high. It is a bit similar to some parts of Sansara (the old part of the continent), with the main difference that Caledon - Winterfell have smaller islands and smaller distance between islands. In many places, ground is highly fragmented, too fragmented for the sensibility of an altitude map. There are a few places with altitude higher then 50 meters, even a few mountains. One of the highest and the most massive is in Caledon On Sea.

Vegetation is what makes this continent unique. The dark lush forests are in a big contrast with the classic tropical paradise private continents. These forests are full of unknown secrets and a great place for an adventure. Also, a traveler might discover that every region has a different sky texture. Luminosity, day cycle and cloud/haze structure are not the same for all regions. Different sky textures can be found in Sansara, in Bay City channel island and sometimes in microcontinents, but no place has so many changes like Caledon - Winterfell.

Altitude researches showed that this continent has similar altitude changes with old parts of Sansara. This means that the ground features are highly fragmented,without being too high or too massive. 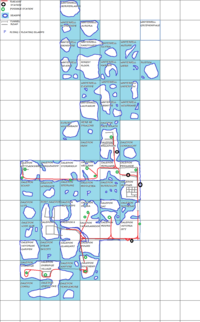 The continent is newcomer friendly. Ban lines and entity orbs are rare (they were not detected in our research). Transportation is very easy. Caledon has a large railway with many branches and also a lot of local roads. Both continents have water access ways, protected waterways. There are many protected areas, from gardens to dark forests and mystic buildings in Winterfell. It is easy to travel by foot accross parcels. Flying is restricted in some places. Roads in Winterfell are present, but usually they are simple country roads.

Ban lines, if they exist, they are very rare. Entity orb teleporters might not exist.

The independent state of Caledon is powered up by the steampunk technology of the 1920's. The state developed fast and now owns a large group of sims. The landscapes remind of the British rural and urban places of the Victorian era. The continent has a high accesibility, with a large railway system, roads and waterways. There are many points of interest, presented on Caledon official site and in other places:

Some places that deserve to be visited are the Caledon sky city, Caledon Library (Oxbridge) - an excellent place for newcomers, Caledon (sim - capital city), Caledon Victorian City, Caledon Port or Caledon Cavorite Mine.

Winterfell is an estate and also a micronation, North of Caledon. Today, it has reduced its surface. The grid survey [4] shows that many sims worn the name winterfel. The land is composed of many large forest islands.

[6] - a description of Winterfell