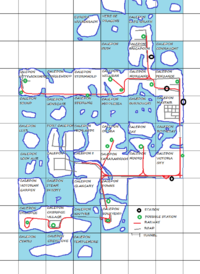 This is the second railway in length, after the railway system of Heterocera. It is so large that it is a transcontinental railway of Caledon - Winterfel continent.

The railway is different from the standard railways of Heterocera. It has a different model of track and different textures. Basically, both rails work on the same 'guide' principle and have nearly the same wideness. The railway system of Caledon uses a different types of switches. Many times, the railways are near streets and the streets are smaller.

Caledon rail is very complex. It connects 21 sims, from all 39 that form the independent state of Caledon. It has 6 branches. Trains can be found both on main rail and the branches. A central railway starts on the North-West part of Caledon, moves to North-East, then follows the East coast to South-East, then moves to South-West. It connects 16 sims. Other 5 sims have railway access through the branches.

In North-West, the main rail starts at Caledon Kittywickshire, a small town, then it goes through a large and beautifull forest, through a gigantic bridge. Landscape is incredible. In Caledon Welsian, a small brench connects the railway with the cavorite mine. The small line has its own train, actioned by direct command.

From Penzance, the railway follows the coast to South, through Caledon Mayfair (where is also a town) and then to South-East in Caledon Victoria City. Of great interest is a long tunnel. Also, near the tunnel, a large bridge can rise when a boat is comming. This was the largest underground tunnel until the new, modern Second Norway Railway was built.

In Caledon Victoria City, there is the largest station, with 3 lines. This is also the largest urban area of the continent.

From Victoria City, the railway switches to South-West. The first sector is near a paved street. It has 3 branches, each one connecting one central sim with the railway: Caledon Cay, Caledon II and Caledon On Sea. All 3 rails have interesting bridges and end in a residential area. Also, all 3 lines have junctions that allow trains to go left or right.

The main railway then connects Caledon South End, using a large bridge. There, the rail creates a large loop. To West, is goes through the sim Caledon Kintyre. The technical solution is one of the most ingenios. Instead of using a large bridge, constructors decided to create a very long underwater tunnel. In many parts, there are windows that allow travelers to see the sea floor. It is a very long tunnel (the whole sim). The next station to West is Caledon Oxbridge Village, floolwed by Caledon Oxbridge, with the largest and most advanced infohub. There, the railway forms another loop.

It has 4 large stations and 16 smaller stations. Most impressive of them all is Caledon Victoria City. The other 3 large stations have buildings. The small stations have no building. Their position is not sure. All branches start with a small station. Usually, you can see near a station a sign with the information about the next train. Sometimes, the signs are not true.

Caledon trains are fully automated. They are created at a terminal station, then follow the rail to the destination, where they are deleted. They have an engine and two open wagons. To use them, just sit, even when they are not in station. Not all trains stop at all stations. The train in Caledon Welsian that connects the main rail with the cavorite mine, is different, it is formed by a single wagon that starts moving when touched.

Trains on the Caledon railway are moving fast, with a similar speed to that of the rails in Heterocera. The main difference eis that Caledon railways never cross two close sim borders, so crashes are much more rare.

The following numbers are distances measured in km. Estimated maximum error is 5%.