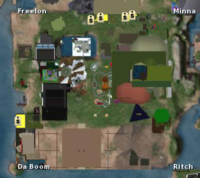 Please see History of Second Life for a detalied history.

According to the legend, this sim is the oldest of all sims. In the oldest records, there is showen a sim in the anchient Lindenworld (2001) that some residents suppose it is the primordial Da Boom. There is no way to prove this, but sounds as an interesting theory. One prove might be the fact that this sim is the center of the coordinates system and from the oldest time it used the number one server, so it is a chance that it came online a bit earlier and all other primordial sims were added left and right to it.

The oldest sims are in fact a group of 16, known as San Fransisco Regions. When the beta version of Second Life came online, all 16 came online at the same time. Later, they were surrounded by other sims that slowly created Sansara continent. Many people supposed the name came from Big Bang, but in fact it comes from a street named De Boom in San Francisco.

From that old time, new sims started to be created all around: to North, to East, later to West. After a few years, when Sansara continent was too small for the increasing population, new continents were added, at a higher and higher distance from Da Boom. Also, private-owned structures were created on the map, at a higher and higher distance. So, if we look on the grid expansion, Da Boom was really the central point of a big bang.

Please see Grid Map And Dimensions for a complete image.

Da Boom sim has Coordinates 1000/1000 (note that these are grid coordinates, like the ones used by Gridsurvey). There is no sim at a higher distance then 1000 sim from Da Boom and sim density decreases with the increase of distance.

Da Boom allows a first division of the grid map in 4 large and almost equal squares: South-East, South-West, Nouth-East and North-West. Even so, the grid is far too large for small analysis and map creations, so for Second Life Geography project it had to be divided into smaller units, named grid sectors. A Grid Sector is a square of 100 sims long and 100 sims wide. Da Boom sim is the central point that separates 4 such units.

Its importance for Geography is notable in many points. For example, it is a central destination for Mountains Of Central Sansara. And if someone makes a tool to find coordinates, like a ContinentDetector, this sim has the most easy coordinates to remember.

Da Boom is a moderate rating sim, with low lag and med-high population density. It has both Protected Land and Inhabited Land, but no Abandoned Land. Recently, a few small parcels become available for sale, but at very high prices. There is no Land With Restricted Access, in fact you can come and visit all parts of this sim without problems.

It has a central parcel of protected land, named Linden Playground, a large park for children and even adults, with a lot of toys. There are many parcels full of interesting things, including a small snowland, some cages, a shop, many decorative bouldings and other constructions that can not be included in a single category.