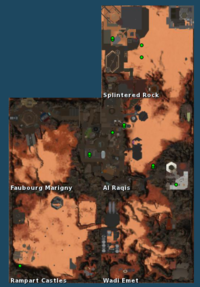 This place was first made to resemble Frank Herbert's Dune, a desert planet like Arrakis. Later, it received influences from earth-like places like the Taklamakan desert.

For a Geograph, these 5 sims are a real shock. [[Altitude varies up to unexpected hights. The highest measured point is 155 meters, one of the highest point on private-own land and higher then many continents (see Continent for more info).

Each sim is made of 3 different altitude levels. The center, with low elevation, is full of slopes and holes, sometimes hides ruins and sometimes it can host dangerous snakes. It has a yellow - orange color. Sand blows over and over. The middle-altitude place surrounds the center and has a red color. These are low mountains, still higher then majority of private-owned mountains. They host a high variety of buildings, majority of them are sci-fi themed and have an Arabic influence. The third level is composed of highly unaccessible dark-colored mountains, at the border of each sim. They are very difficil to climb, flying is a better alternative.

If you decide to fly, you will find a lot of sky platforms and not only. Up in cosmos, there are planets and asteroids.

This land is owned by a single estate. It is a placed made for roleplay. There is no Land With Restricted Access and harass is strictly porhibited.