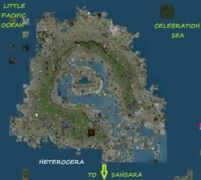 Heterocera (or Atoll Continent) is the second historical mainland continent. It has the most advanced transportation systems of all mainland continents. This includes: a vast railway system, the most complex road system and internal and external waterways. The Geographical features are unique and are composed of vast plains, coasts, mountains, corals and hills. Heterocera is the most populated continent, with the smallest percent of abandoned land and also the continent with the smallest percent of places to rent.

It is linked to Sansara by the ANWR channel (see Transcontinental Channels).

The first sims were created in March, 21th, 2005, starting from Calleta region. In December 2nd, 2005, the continent was complete. The first sims created were the ones in South, then the ones in North East. The North West corner was built the last. A daily evolution of all mainland continents can be seen here:[1]. So, the construction of this continent took 257 days.

Heterocera was originally created around an "abandoned civilization" theme, much like what was done with Nova Albion, and later with Nautilus City. Magellan Linden documented these features on his blog. Centered on the Moth Temple in IrisD, the original builds included artifacts like causeways and shacks; many of these were removed or altered once the land was sold. In keeping with the temple theme and continent name, nearly all regions on the atoll are named after moth species.

The inventory library includes assets to reproduce or match many of the original features. These are under Library/Objects/Atoll continent stuff, Library/Textures/Atoll Textures, and Library/Terrain Textures/Atoll terrain textures.

After the original construction period, the geographic features remained unchanged. The most important changes were made on the railway system, that expanded until 2013. 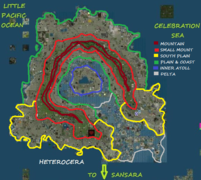 The land features are very complex and respects a specific symmetry patern.

The following structures are from center exterior.

The inner lake (Zygaena) is small, the size of two sims. It is not connected to the ocean. The bigest part of the lake is inside Zygaena sim. The lake floor is smooth, gray and populated with a small number of sea plants. In the center of the lake, there is an abandoned notecard giver. Even if the lake is small, it has its own port and even submarines. Also, the inner lake is 40 meters above sea level. It looks like a lake with sweet water.

Inner Atoll has a circular shape and is formed of a ring of low mountains (or hills) around the inner lake. To the exterior, the mountains are smaller and are replaced with smaller hills. The inner atoll has two roads that form two rings, one close to the inner shore and one near the outer shore.

The Larger Lake has a circular shape, around the inner atoll. Water is not deep, but navigation is not a problem. The lake is usually one sim wide (in East), but expands up to more then two sims in some parts in West. The lake is full of polders (artificial islands). Also, there are many coral islands that usually don't rise more then 1 meter above sea level. To create an island is sometimes very easy, since in many places water is less then 4 meters deep, so an island could be easy created by terraform. The lake floor is covered with corals. The local fish and algae population is not high. The outer lake has many big and small ports.

The Inner Delta is the water structure that connects the outer lake with the ocean. Usually, the water is not deep (sometimes less then 4 meters). Many wooden bridges connect the shores with the parcels inside the delta. These bridges are usually about 50 cm above water, but sometimes they are higher, to allow ships to pass. The navigation ways are protected land. On the map, they are visible as channels inside the delta. There are some places called Void. These are protected waters and usually are deeper. The temple of Isis is the center of the delta. More information is available at Heterocera Inner Waters.

The following structures form paralel rings from the continent interior to its exterior.

Inner Plains are close to the shores of the atoll. They are a very good place to build. It is not a real plain. Altitude raises slowly from lake shore. There is a road that follows this plain at some distance to the shore. Since land has direct road and water access (and indirect railway access), the majority of parcels are busy. There are a lot of ports and other coast constructions, but there are only a few connections of protected land accross the shore.

Low Inner Mountains are not an official structure, but in practice they are an important feature. They form an almost vertical versance at their border with the inner plains. The VRC main railway travels exactly through this versance. This place has direct railway access, but there are also roads that follow the railway at some distance. To the exterior of the continent, they are continued with a plateau, also very good for constructions, but used mostly for parks, gardens and forests, sometimes with an incredible design.

Mountain Ridge is the bigest natural obstacle in all continents. These are the longest and the highest mountains in Second Life. No road passes from inner plains to outer plains, except along the coast. Only in East, the Mountain Railway climbs the high Pavonia Pass and allows access to Bembecia Hights. However, road 6 gives access to many mountain sims (walks at the bottom of the mountain ridge, without passing over it). More information is available at Mountains Of Heterocera.

Low Outer Mountains are on the exterior side of the mountains. Unlike the inner mountains, they don't form a large plateau, but a lot of hills. In West, there are some sims without direct road or railway access, they are the most unpopulated sims in Heterocera. To East, they are full of railways and form a paradise for railroaders. The altitude slowly decrease to the coast plains.

Outer Plains are close to the shores. They might be considered plains compared with the mountains, but they are actually hills. There is a large road network throughout the coast plains. In West, there are 3 rivers that cross the plain. In East, the railway network has many branches that extend to many sims. They host a few rivers and a few boulder Dams.

Shore The outer shore of Heterocera is rocky and high. It gives some of the most spectacular landscapes in Second Life. The vegetation is not the same along the shore. It varies from rusted autumn trees to palm trees. The ocean floor has the same texture then the outer lake and it gets much deeper. The coast waters are good for sailing, but are not as wide as the waters of other new continents. Additional information is available at Heterocera Outer Waters.

These are some particular features that disrupt the circular shape.

The Outer Delta is at the continent exterior. Its waters are deeper then the inner delta. It consists of many low islands (coral islands) and submerged parcels, connected with protected waterways. It doesn't look like a classic sedimentary delta. The islands are made of corals and the sea floor is also of coral origin.

South West Plain are West to the outer delta. It is an expansion of the outer plain, a group of sedimentary hills. It is crossed by the WARR railway to West and by many railways to East (where it hosts the Calleta town).

South East Plain is a symetric plain on the Eastern side of the delta, but on half the size of the West plain. It is most known for the railways that facilitate transport in the area and for the Jewish community. Yo North-East, it continues with some oceanic sims. 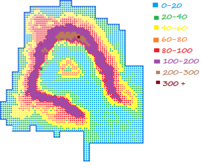 These Altitude maps are made with a script attached to an avatar. The script measures the average altitude for 9 representative spots in every sim. The error should be about 20 meters. Since ban lines and entity orbs are much rare in Heterocera then in East Sansara, the result is much more accurate. The measurements shuw some unexpected results.

Heterocera has the highest altitude (365 to 389 meters), followed by Sharp Continent (Svecia - 350 meters) and Sansara (Tethis, 315 meters). No other continent has altitudes higher then 190 meters.

Heterocera has some urban settlements, not as large as Bay City in Sansara, Nautilus City (in Nautilus) or Kama City in Zindra, but still notable. Calleta City is the most notable one, followed by Bembecia. Also, in December 2013, a town appeared like from nowhere in Gluphisia. Calleta is a historical place, the first area new settlers came from Sansara accross ANWR channel. It has a strategic position. 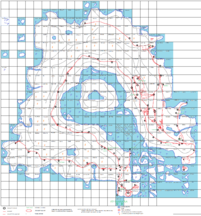 Heterocera has railways, roads and waterways and is the continent with the largest infrastructure and accesibility (see the map at right).

The railway system is unique in Heterocera and land sims with railway are usually more populated then sims without railway. This might be the reason why Heterocera is the most populated continent. The majority of railways are on protected land, but some of them are private. However, all trains have access on all railways.

Also, Heterocera has some airports and airways. It must be mentioned here that Heterocera is one of the most friendly continents. There are not many ban lines or entity orbs and the high number of protected ways (road, rail, water) allows a traveler to fine an alternative way.

In late November 2013, the WARR railway was abandoned. 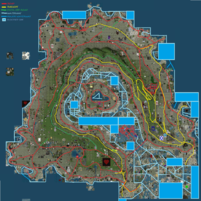 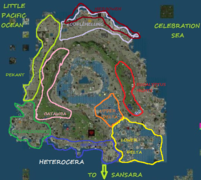 Eucalyptus Heights - the official name of the mountains in East

Hierboven - the water sims of the outer lagoon

The Coordinates are given from Gridsurvey [2] for every sim. They are given in the following format: longitude (min-max) / latitude (min-max). The coordinates mark a square group of sims. Since Heterocera is almost spherical, the coordinates might include sims from other regions. That is why the subcontinent regions are shown in a different way then in classic maps:

Pages on the wiki: