As of April 2011, all Viewer 2 builds MUST be performed with Visual Studio 2010. Please see Viewer 2 Microsoft Windows Builds for instructions.

Setting up the Microsoft Visual Studio

This page describes installation and configuration properties for Microsoft Visual Studio (MSVS) as it relates to a development environment for Second Life.

If you do not already own one of the above recognized version, then you may download Microsoft's free IDE and compiler editions.

If you installed Visual C++ Express 2005 SP1 (i.e. not using the link above) and want to build Snowglobe v1, make sure to install the KB971090 security update (else you will end up with a non-functional SLPlugin.exe and viewer because of embedded manifests containing two references to VC80.CRT, one for v8.0.50727.762 and the other for v8.0.50727.4053... unlike with v1.23 and previous viewers, some pre-compiled libraries were obviously compiled with the updated VC80 installed on the build system and your own build systems must have the matching VC80 libraries).

Make sure to apply the Service Pack 1 if you are using an older version of Visual C++ 2005 Express. If you are using Windows Vista for development, you will need Visual Studio 2005 Service Pack 1 Update for Windows Vista, too. Note: if you use the web installer that download data during install, then service packs are already included, no manuall install required (current SP is 2).

Note that, although the latest version of Visual C++ Express Edition is 2008, it is recommended to use 2005 version for the purpose of Second Life development for the moment. This page will be updated when we get enough experiences on VC++ 2008. Note: before using 2008 it might be better to wait (as of december 2009), because the beta of VC 2010 is out and release should be available soon.

If you have previously installed an older version of the DirectX 9.0 SDK, remove it first (from Control Panel -> Add or Remove Programs) before installing this version. Installing the new SDK "on top" of an older version may cause problems. Upon installing DirectX, it is sufficient to install only the Headers and Libs part. Other DX development tools are not necessary.

NOTE: Make sure you install to paths without spaces in it.

Refer to this page for instructions on how to build the viewer: Microsoft Windows Builds

After running develop.py, some extra steps are required if you use an express edition of Visual Studio.

After opening the solution, the first thing todo is set the build type, as shown in the following picture -

You now need to set the start up project, right click in the solution explorer on secondlife-bin and from the popup menu select "Set As StartUp Project" , as shown - 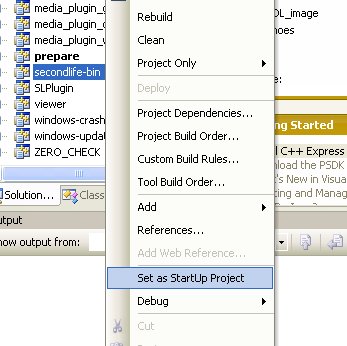 Finally, again right click on secondlife-bin in the solution explorer, and this time select properties. On the window that opens select "Configuration Properties" on the left and then "Debugging" to get the view shown below, in the box Working Directory, add the text "..\..\newview" then press "OK"