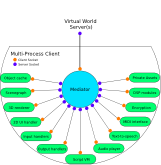 This is an early draft so scope and focus are still fairly open. Please add comments to the Talk:Multi-Process Client VAG -- draft if you have slightly different concerns so that we can try to converge on a common viewpoint. This discussion could also expose other similar VAGs that are needed in this area. 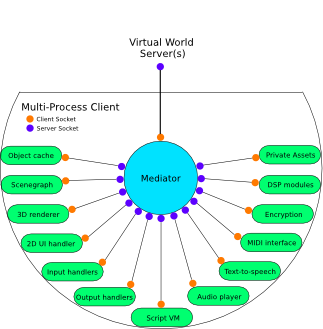 A new client architecture is described, in which client facilities are highly decoupled into processes that communicate over sockets. This architecture is contrasted with that of the monolithic client. It is also proposed as a reference client for testing the forthcoming AWG architecture, and also as a generic client platform for further client evolution. This work is undertaken by the Multi-Process Client VAG.

More specifically, the Multi-Process Client VAG is concerned with identifying the key server-side changes that impact on the client, proposing at least one reference design for an "MPClient" that can address all the expected changes, and assisting with the design and implementation of such a reference client. This work is expected to generate feedback in the opposite direction as well: a range of client-based Use_Cases will be examined in this VAG and used to generate requirements for the system architecture, particularly in the areas of scalability and interoperability.

As is evident from its name, this Multi-Process Client VAG has predefined one specific aspect of the required client, namely the change from the monolithic process structure of the original Linden client to a multi-process one. This will be discussed and justified in detail below, but it is not exclusionary: other client-oriented viewpoint groups may proceed along different lines.

This is a technical VAG.

See the Architecture Working Group and the Viewpoint Advocacy Groups for more information.

Areas addressed by this viewpoint

Areas not addressed by this viewpoint

For brevity, the client developed here is referred to as the "MPClient".

Translated into mortalspeak: other applications probably use the same structure, so we ought to check them out, even if they don't claim an IEEE_1471 viewpoint.

While not described using IEEE-1471 viewpoints, the following applications are also highly process-factored:

General concerns addressed by this viewpoint

Specific concerns within this viewpoint

Rationale for a Multi-Process Client

Problems with the Monolithic Client

The original SL client performs its intended role as a fixed-function viewer for the self-contained Second Life service reasonably well, but it does not meet the requirements of a platform client, for the following reasons:

Benefits of a Multi-Process Client

The above concerns are addressed quite effectively in a multi-process client architecture, as follows:

Concerns in a Multi-Process Client

Historically, this use case provided the initial motivation for the Multi-Process Client.

The new architecture being designed under the auspices of the Architecture Working Group is expected to deliver reference implementations of key REST services fairly rapidly, whereas development of the monolithic SL client moves slowly because of conflicting requirements and insufficient manpower. Of particular concern here is that the official build repository is not open to community merging, which means that alternative community client-code repositories are continually chasing taillights and having to re-merge their changes. This is not conducive to rapid progress, and hence an alternative client platform that would be free of such constraints was sought.

A Multi-Process Client as defined here would be even more free of constraints than a monolithic client built from an open community SVN repository. Because of the mix'n'match attachment of Facility modules to meet personal requirements, as well as the license barrier created by network sockets, and also the ability to write Facility programs in any language whatsoever that supports sockets, such a client would in practice have fewer developer constraints than almost any other application in existence. This then is a very powerful approach to the problem.

A "Normal client" can easily be defined for any given local grid, but in a global supergrid of interoperating grids such a concept is somewhat limiting as well.

A more appropriate model might be one in which a "Minimal normal client" is packaged with commonly used Facilities, and the user downloads additional Facilities from a suitable repository as needed ... in other words, the model employed by modern web browsers.

The Multi-Process Client architecture detailed below represents only one possible factoring of the client into a suite of communicating processes. This initial factoring provides a concrete basis for analysis and discussion, but is very likely to change if a better factoring is found.

It is proposed that the client be structured as follows at the level of operating system processes and communications flows: 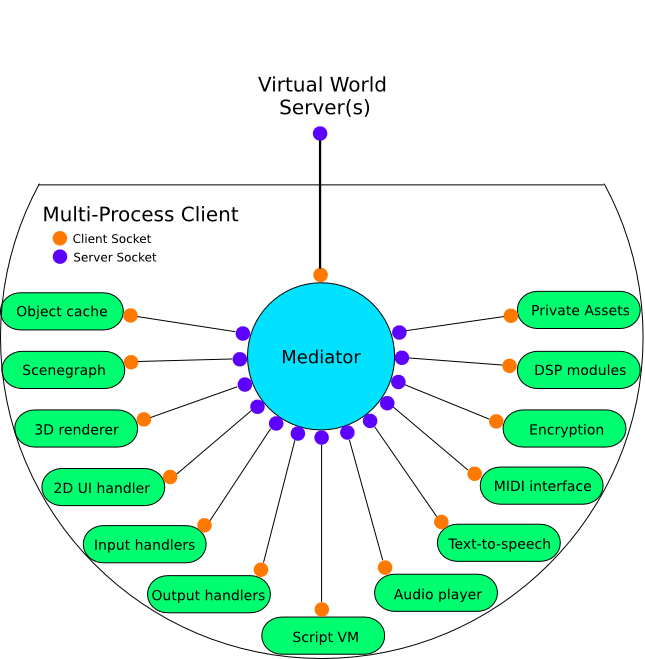 Processes and Communication Flows. This diagram is representative of the general client architecture, rather than describing a specific design. The Facilities illustrated are a subset of those possible, and the list of candidates is inherently open-ended by the extensibility of the model. Also, no Facility Optimization is shown in the above diagram, and this may introduce additional high-bandwidth channels between Facilities and/or merging.

NOTE. One specific Facility Optimization is so simple and generic that it should be the default for this architecture: after attachment through the Mediator, Facility processes should talk to each other directly, rather than through the Mediator. This optimization requires little change of design, but conceptually adds a sparse mesh of connections between Facilities (connected only where there is a functional dependency), and is clearly more efficient.

The Mediator is the communications hub of the client. As such, it is expected to benefit from being as fast as possible and as small as possible (for CPU cache locality). To this end, and in keeping with the client design architecture, all non-communication functions should be placed in attached processes, even if those functions relate to the Mediator alone. For example, Mediator configuration and subsequent control should be carried out by a Facility, not in the Mediator itself.

The Mediator is expected to comprise the following elements:

The Mediator is a centralized message router for the client, and as such it is a single point of failure. For advanced fault-tolerant clients such as might be running in a broadcast studio, either hot standby or load balancing techniques could be employed to reduce the impact of failure, using at least two Mediators in a resilient or high-availability configuration.

NOTE. After Facilities attach through the Mediator, the default Facility Optimization is for Facility processes to talk to each other directly, rather than through the Mediator. This is highly beneficial for reducing overheads and latency in inter-facility communications, but the Mediator still needs to be efficient in its normal duties as proxy to the VW servers.

Each of the following Facilities is implemented as a process which attaches to a Facility Socket on the Mediator process. Two or more performance-critical Facilities may be combined if the engineering tradeoff is deemed acceptable. The list includes some Facilities that are large subsystems which have not yet been refactored into components (eg. Complete 3D Engine).

As noted earlier, any processes that are considered logically "frontend" in the sense of lying between VW servers and the Mediator are actually implemented as Facilities as well, despite these being primarily "backend". At the level of process abstraction and setup, there is no distinction. The only difference is that actual frontend processes also employ direct connections to remote servers. An example of this kind of Facility could be the libsecondlife-based LibSecondlife Gateway (if used). Direct external connections are considered a Facility Optimization within this client design model, since communication with remote parties could have been routed through the Mediator instead.

Note that Facilities are implemented as full processes, not as DLL/.so plugins. As a result, they can be run standalone for testing in a reduced capacity, or connected to an alternative fuzzing Mediator to check their robustness. They are not dependent on the Mediator process's internal symbols nor on those of any other Facility.

Because Facilities run as independent processes, the overall client can be made extremely robust and resilient to failure of individual facilities.

NOTE. Depending on the function implemented, some Facilities may elect to open higher-bandwidth channels to other Facilities, mediated through the Mediator Facility API. One such Facility Optimization is a default: Facilities obtain from the Mediator the service endpoint socket for other Facilities on which they have a direct dependency, and they then connect to those sockets directly. Consequently, normal inter-Facility communication is point-to-point. Some Facilities may even merge with others, when performance constraints leave no alternative (rare).

Where appropriate, multiple Facilities of the same type may be attached concurrently: for example, both a normal workstation renderer and an HDTV renderer could operate simultaneously, or dual Wiimotes could control a pair of katanas, or multiple MIDI instruments might be employed during a musical performance.

Please note that this is a preliminary and tentative specification.

aka. How does a Facility tell the Mediator what services it has to offer?

IMPORTANT: What is the absolute minimum that the Mediator needs to know about the services offered by a Facility? Can we reduce it down to nothing, other than a service name/number? The less the Mediator knows, the faster it can be (at least on a simplistic level), although whether this translates into a faster client overall is debatable.

aka. 1) How does one Facility use the services of another Facility?

2) How does the Mediator manage the communication between Facilities?

The options available and the advantages/disadvantages of each in this application are currently being examined.

A number of well-known options exist:

A choice needs to be made but there is no single obvious candidate. All have advantages and disadvantages, and these are not the same ones as apply in AWG server-side. Additional input (lots of it!) is essential here. Trialing alternatives may be required as well.

This section focuses on those Facilities which individual stakeholders consider relevant to their particular viewpoint, at this time. This is a very limited set at present, as it derives from the expected use of the client as a QA and measurement tool. The list of Facilities described here will expand as the Multi-Process Client evolves towards a full virtual-worlds client.

The descriptions in this section are brief enough to be read together as a set. Once full design and implementation begins on a given Facility, the relevant section below should link to a page dedicated to that Facility.

Anyone with an interest in this Viewpoint is welcome to join the roster of VAG members below. You should also join the AW_Groupies group in Second Life.

The above does not preclude modifications which identify and detail specific problems and incorrect designs so that they can be corrected; such contributions are very valuable. It does preclude wholesale negativity. If you're not interested in the project, just go away.

This group is currently active on a continuous basis, communicating over group and friend/calling-card IM and via wiki. We will also endeavor to meet at least once a week in-world, or more frequently if desired.

This VAG expresses a client-oriented viewpoint, and hence is concerned only with those Architectural Descriptions/Views that impact on the client. This section identifies:

Tools employed by this VAG

Please note that the Multi-Process Client VAG is a non-hierarchical VAG in every respect, without exception. Any tags supplied with names are purely informational. Stakeholder ordering is alphabetical.