A Second World War aircraft carrier, with working elevators. Test your aircraft landing skills! It's also a rez zone; and if you click on the crane, it'll give you a free sailor outfit.

A hotel, built on top of the old Bay City asylum site. Or it was a hotel, before it had to be abandoned.

Find clues to the lost Dragon's Deep in the lighthouse.

For the business types of the grid. Two modern style buildings ready to accomodate medium to large meetings/conferences.

A romantic interpretation of a medieval German castle; also, a pirate lair!

In space, no one can hear you type ... experience the far future at the base on Mos Ainsley. Spacesuits available for all!

Lido Hall with music, and patio with conversational areas.

This is a tropical beach crowned by the skeleton of a giant beast. Hammocks and inner tubes, undersea treasure and lots to explore for divers, places to rezz your boats, and more!

While following along the Great Wall, you might come across the ticket booth to the Pyri Fair.

Touch the floating barrel with the sign to ride a boat to the fair.

Walk or run (ctrl-R) up the mountain to the fair. When you're there, ride the carousel, eat some cotton candy, and get your fortune told.

Make sure to try the Tunnel of Love. It's full of surprises. Remember to wear your ticket!

The Rizal Games Region is filled with activities.

On top, you've got the Rizal hedge maze, a hippo themed playground with a bouncy castle, free kites, photoboards, a giant keyboard to dance on, corn dogs and more.

Down by the water you have a collection of boardwalk shops and entertainments. Play Tap-a-Talpid or throw darts at a balloon wall for prizes. You'll find free bicycles, t shirts, food, fun hats and other goodies to take home with you. Ride a rocket, defeat the Prize Claw, have your fortune told, explore the pirate ship, race in bumperboats and use the water cannons on your friends. 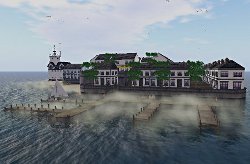 Barney's Bay is a seaside town with old world charm. Travel the town with a free bicycle, check out the shops for freebies, indulge yourself at the ice cream shop, explore the lighthouse, and play checkers or throw some darts in the pub. Let Mole & Mole Travel Agency lead you to more LDPW destinations!

Degrand, and surrounding Regions to east and west

An extensive area of undersea features for the intrepid venturer to explore !

So put on your scuba set, mer-tail, or hop in your mini submarine and get under the waves.

... or a myriad other wonderful things there to be discovered, maybe even buried treasure !

Descriptions to be added, in the meantime just dive into the sea and find out !

There are many major items of interest in the 'adult' continent of Zindra, architectural marvels, major feats of civil engineering and of course the quirky but fun Zindra mono rail system !

This bridge, together with it's near twin the Silvercreek Bridge on Jeogeot was a prototype for a new design of modern suspension bridge in SL

Don't let that worry you, it's very safe !

A Springtime monument, created on May Day and full of mystical symbolism.

Spend some time here, look for the patterns, find peace.

The dam is open access, via the buildings and tunnel entrance at the foot of the dam

Internal tunnelways deep within the dam lead to storage facilities and to the central pump tower, also accessible by internal ladder for those not afraid of heights

The belltower spillway is connected to the pump tower and contains the main outflow system, beware of falling in - it's a long way out !

The dam has been unmanned for some time, there are rumours that other stranger things have moved into the tunnels ...

Copy all locations to my wikiTiPi HUD