This article is a description of the Second Life Railroad ( SLRR ) on the Heterocera Atoll continent.

The Second Life Railroad ( SLRR ) runs over more then 80 Regions on the Heterocera Atoll (Northern) Continent. More than 20 Regions have branch lines extended out from the Heterocera Main line. Branch lines include the Maritime Line, the North Coast Line, the Mountain Line and the North Line. Track-laying and maintenance are provided by Michael Linden and the Linden Department of Public works LDPW.

The long distances covered by the SLRR Atoll railroad tracks make them a unique feature in Second Life. Residents can operate trains on the SLRR and other railroads, much as anyone can operate a car on the roads in Second Life. Any Resident may use this public facility for any purpose consistent with the Second Life Community Standards/TOS. There are a series of official Linden stations along the SLRR, and at times, Linden Labs has provided automated rail service.

There are many train builders in SL that make a wide variety of trains using several different methods for locomotion. The current SLRR track standards support all types of trains. Thousands of residents own personal trains. Standards for guidance, track and SLRR Switches have enabled residents to develop suitable vehicles. Using the SLRR with its current standard is simple to understand and accessible to Residents and builders of all skill levels.

During one of the LDPW Office_hours at the beginning of 2010 Michael Linden has made the following public statements, summarized here:

The SLRR dates back to 2005 when Linden Lab created these railroad tracks. On the SLRR history page you can find out more how railroad became what it is to date.

Stations with a number are official Linden Lab SLRR station. Stations marked without a number are publicly accessible Resident build locations along the SLRR related to the rail system. Residents are encouraged to add their own railway station to this public list.

Note: You may need to refresh your browser to get the latest image updates to show up. 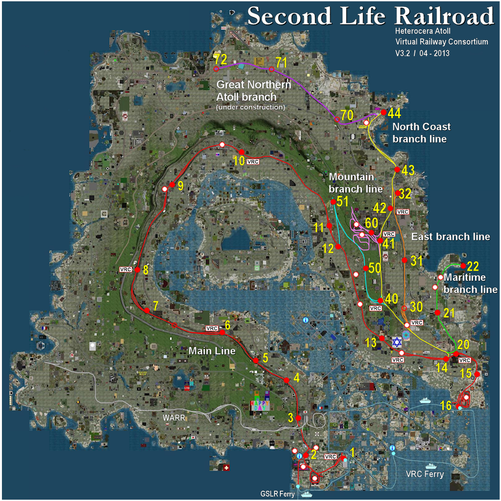 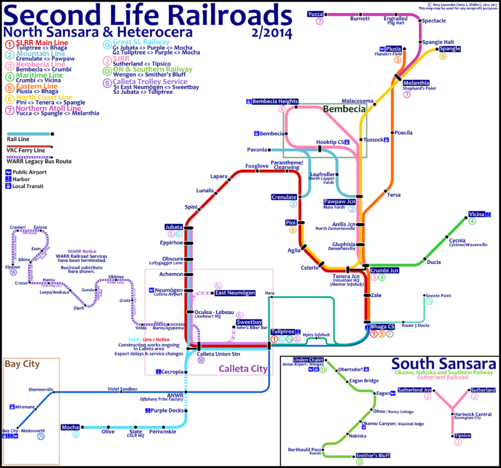 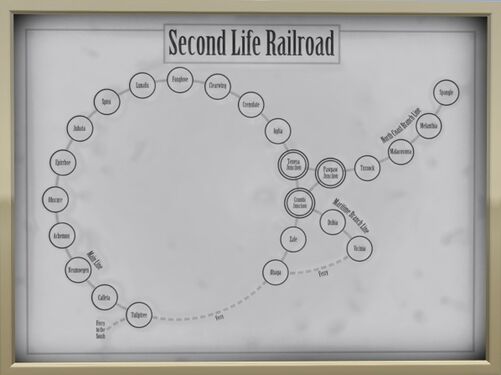 There are several other gauge railroads in SL and private group initiatives, some on private land, some on Linden land.
This is an alphabetic list of some examples. The different systems are not necessarily compatible with SLRR standards. Another list with all railway sysyems can be found at Second Life Geography, transportation chapter.

The rail measurement data is too complex to fit into this paragraph, so a separated article was created:

Diverse measurements showed that Heterocera is the most populated continent. It has less abandoned land and less Unused Land then the other two high populated continents, Zindra and Sansara. There is a strong corelation between infrastructure and population density. This is clearly visible in South West of Heterocera, where, after the death of West Atoll Railroad, many residents abandoned their land and moved away.

Many residents commented that Heterocera is their favorite continent [1] for its railway network, diverse Geography (see Mountains Of Heterocera and Heterocera Inner Waters) and Great Wall.

The above information was compiled by many SL Residents as well as during interviews with Lindens and their alts.

Here are the maximum grade/inclines recorded on the different SLRR branches:

Due to the nature of virtual railroads in SecondLife, grades will naturally be much steeper than what would be considered realistic values.

Here is a list of Related resources. You can find more information about the SLRR and other Rail related articles on these wiki pages and external websites.