The land creation team sets aside "road" parcels in many new Mainland regions; it's the duty of the LDPW to add content to those parcels. Not only roads: walking trails, railways, monorails, bridges, ferryboats, sailing routes, etc. 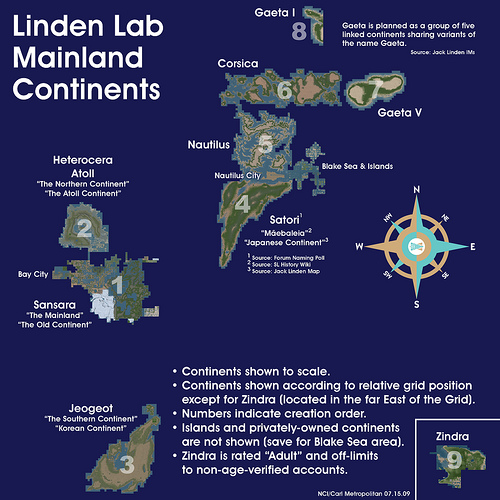 The following directory contains route maps and lists of rez zones arranged and divided by continent for ease of reference and exploration.

The original core SL "Mainland" continent, also incorporating the Snowlands, improvements are now being made to these historic roads. New routes will be described here as they are added.

This continent, commonly known as Atoll, connects with Sansara and has seen intensive roadbuilding activity, meshing in with the SLRR

Not to be confused with the nearby island city of Nautilus which rose from the sea, this is a continent lying to the north of Satori

This continent lies further to the north of Nautilus

A small continent to the east of Corsica

A small incomplete continent to the north of Corsica

The landmass imported from TSL, now known as Sharp Continent, situated to the south east of Satori, which has recently undergone a major overhaul of it's highway system.

These are 4 continents that host the premium homes.

The following is a classification of all continents, based on infrastructure efficiency index. This index is a number calculated on the following factors: length of road/railway network, types of roads (highway, classic, path, off-road), types of railway (classic, special, tram) reported to continent size, restrictions (script, object entry), presence of automated transportation, sea access and network fragmentation. The index was inserted by Second Life Geography team and not by Linden Lab, so it is not something official. The reason for this index is to prove the strong link between infrastructure and population density.

For more information about the continents and links to each continent's page, as they were in spring 2014, check List Of Continents or the main Geographic page, Second Life Geography.

The following links are to maps updated regularly on behalf of the Protected Route Interest Group. All maps are open source and permission to edit and re-distribute is granted, on the condition that they are distributed free thereafter. The sources for these maps are archive wiki pages (Linden_Department_of_Public_Works_Roads), route parcel names, the LDPW blog, support tickets and information gathered from the LDPW open office meetings.

No further amendments were required for the Gaeta V map. The P.R.I.G. sends updated versions in-world when available, the above sub-domains are always current. Further information available at Protected-Routes.com