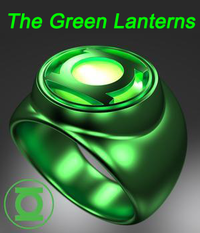 Green Lantern is a character who has been around the comic book universe since 1940. In the current DC comics, the Green Lantern Corps is an intergalactic police force. The power ring worn by each Green Lantern, described as "the most powerful weapon in the universe," can create anything its wearer can imagine.

The Green Lanterns in Second Life

The Green Lanterns can be described in basic terms as a Neighborhood Watch in Second Life. We dress as members of the Green Lantern Corps from the comics, and patrol the grid looking for those in need of help. We assist new residents in making the transition from Real Life into Second Life. We submit Abuse Reports to Linden Lab when griefers attack. We educate landowners about security arrangements. We provide security patrols for Second Life events. We offer free training and uniforms to new members. The Green Lanterns stand between innocent residents and those who would do them harm.

Visit our base in AfterLife and click on the application giver.

The following links are presented for information and help and the content is not "officially endorsed" by The Green Lanterns.

"Green Lantern" is a trademarked name owned by DC Comics. The Green Lanterns is a not-for-profit volunteer comic book fan group. We are not selling anything or making any money from Green Lantern.

In brightest day, in blackest night,
No evil shall escape my sight!
Let those who worship evil's might
Beware my power...Green Lantern's light!