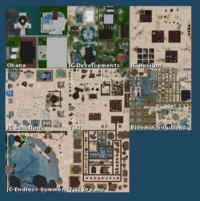 Tiki - JC is a Microcontinent formed of 8 sims, located at Coordinates 506-508/1146-1148, inside Grid Sector E11, Far West Ocean. The name is not official, it comes from some of the sim names, that contain the words Tiki and JC. Also, the Second Life Geography team proposed a transitory name, A091.

The microcontinent is placed at the border of A089 Sim Cluster and can be considered a part of it. On map, it is placed far to West, near the place where sims end and void ocean begins. It is compact, almost forms a square, so it is les svisible. Other sims have JC in their names, outside of the microcontinent. This has something to do with the estate (see below).

What makes Tiki - JC different and most notable is the high amount of objects in open air. There are not many buildings, but objects are. There are shops and many other things, but everything is in opened air, not inside buildings. Another notable thing is the presence of torches.