Currently working on adding an avatar scanner to the SL client.

What is not done yet, but will be:

With the disappearance of SL ratings, I'm working on a replacement based on my TrustNet system. Current status is very experimental but with some functional code.

This is a hack to let a script talk to the viewer.

This is a viewer hack to make it transmit every keypress as a message on a channel. Used to implement an in-world keyboard that shows the real keypresses while the user is typing. General usage is discouraged, as this multiplies by 20-50 times the amount of chat messages sent to the sim and LL probably wouldn't like this sort of thing to be used widely.

Status: Stable, but needs cleaning up and improvements.

The repository is located at svn.daleglass.net

How to get a patch

People sometimes ask me if I have patches. Currently I don't make them, because you can easily create an up to date one. Here's how:

For example, to get a patch with my avatar scanner:

This will create a patch with the difference between my buildfixes branch and another. This should apply cleanly to pristine sources.

Some branches are fed changes from others. This graph shows the hierarchy. 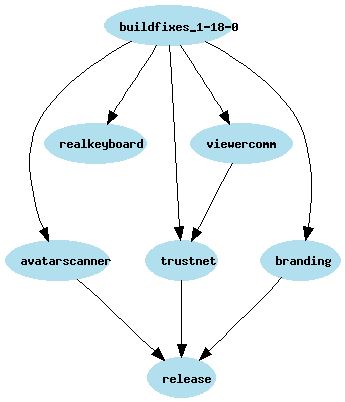 My release branch (see above) is periodically packaged into an installer. If you get this, have in mind this is completely unofficial and unsupported by Linden Lab. Don't report bugs you find in it to LL.

This version will try to send crash reports to me, and not to LL. Updates will be downloaded from my server as well.

The latest installer can be found at daleglass.net

There's no autoupdate mechanism yet.

I don't create Linux packages yet. You'll have to get the source from SVN and build it

I may start making packages if there is demand.

I don't currently use BSD, so you'll have to get the source from SVN and build it

I don't have any Mac hardware, so I can't create packages for it. I'm not currently planning to buy any either.

This means that Mac users will have to build it from source, or get somebody to integrate my changes and create a package for them.

Despite this, anybody using it on a Mac is welcome to submit bug reports. If it's a Mac specific problem, I will appreciate information on how to fix it. The bug reporter will be expected to test the results for me, since I can't.

Instructions in progress for quickly building the viewer under Ubuntu, in standalone mode:

To build, artwork is needed.

Ubuntu doesn't come with the right version of cmake, build it:

View the issues Dale Glass has filed at jira.secondlife.com
Retrieved from "https://wiki.secondlife.com/w/index.php?title=User:Dale_Glass&oldid=126642"
Category: