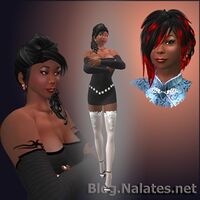 I've been in Second Life since March 2008. You can find me blogging about Second Life and Myst-Uru at: Blog.Nalates.net.

The blog menu will reveal information about Second Life viewers, features, and news.

You can also find me on Twitter Nalates and Plurk Nalates from time to time. I also have a Facebook page, sort of mandatory. I also have a Google+ page. Please follow, fan, or friend if you're so moved.

Of course I have an SL profile.

I Can't Login - From time-to-time changes in or problems with Second Life create login problems. I wrote this in October 2010 when ghosting became a plague. There are some interesting solutions for how to get back into Second Life without having to go through support.

SL Avatar Won't Render Fixes - This happens and some people can't get there avatar to render for days. This is a set of fixes for that problem. It also explains many of the reasons an avatar won;t render. The explanations can hopefully help you figure out the reason your avatar does not render. Also, some of the fixes recommended by others start people off with the most arduous fixes. I tried to give people the quick and easy and work up to the tedious and complex.

Lost or Missing Inventory Second Life - This is an old problem. From time to time it returns as a plague. Mostly it is a random individual problem. In 2010 it was common for those using multiple viewers to loose inventory. When Viewer 2 started changing how inventory information is delivered, lots of people were having problems. Changing between Viewer 1 and Viewer 2 style viewers aggravated the problem. I wrote this to collect the fixes needed by those of us that use multiple viewers.

Second Life Clean Install for Advanced Users - I wrote this for those of us that use multiple viewers. When you have 13 different viewers installed and someone tells you you need to remove all your viewers and start over... you really want to be sure that is what is needed and that you do it well. I believe removing all viewers is an absolute last resort.