AWG Scalability through per-resident subdivision of the Grid

Any SL scalability study aims at ramping up the processing and network capacity of a given location in Second Life with the number of avatars present at this location in the most linear fashion attainable: the logical solution is to tie this performance to the avatars and not the land. Because any given object or avatar can only be at one place at any given time, it also makes sense that avatars and objects belonging to a given player be simulated by the same server. Because each resident's grid usage is roughly comparable to another's, distributing the load per resident also makes sense. Because the load induced by a given resident is generally not expected to jump up and down widely in the short term, even an initially static distribution of server performance across players is a good start. Because a resident's performance usage in the grid is highly dependent on the number of inworld objects they possess, ramping up the performance alloted to a given player according to their land possession / prim allotment is a good solution, and is also fair considering landowners pay for the SL servers in the first place.

Instead of subdivising the simulation load geographically among static regions, subdivise this load across the owners of the avatars and objects. Your avatar and all your prims, the physics and scripts of your objects, etc. are simulated and served by your one allocated simulator gridwide, regardless of where they are in the Grid. An avatar UUID is paired to a simulator, much like a web domain name is tied to an IP address through DNS.

A client's viewer or a task is then understood as a presence, encoded into the ownerkey / avatar UUID, and simulators only have to keep track of this presence on your parcel, which is a lot less work than receiving data representing the session of the visiting avatar, their attachments, states of the running scripts inside, etc. When your avatar moves and comes into view of a new parcel, your viewer gets the ID of the landowner, which in turn indicates which simulator (the "local simulator") runs that person's content. Your simulator connects to this server, provided this parcel is accessible for you. Then this "local" simulator provides your own simulator with a presence list, which is nothing more than a list of the ownerkeys of content or avatars that are present on this parcel. Your viewer opens a connection for each ownerkey/simulator on this list, and they then send you relevant information about the content they each run, that is in view for you. This distributes the load between multiple simulators. Your viewer simply aggregates all this information incoming from multiple sources in a single 3D renderview.

Illustration: Jesrad Seraph meets, and chats with, Mustbe Barmy at some third-party's store, while receiving IMs from James Samiam.

Purple, then Green, then Blue

As can be seen above, the client receives content from three different simulators instead of just one, and each of those simulators bears a load that varies only to a small extent wherever the agent goes.

In this scheme, concurrency is encoded into the state of connections between simulators and clients: an open connection is an indicator of local concurrency for both sides, whereas an absence of connection indicates there is no concurrency so far between the entities. This is useful for scalability of things such as chat, because then the work of determining distances and limits is already pre-calculated to a great extent.

Workflow of basic operations under Per-Resident Subdivision: apart from the distribution of the simulation load between multiple simulators, these operations follow steps similar to those of the current Grid. 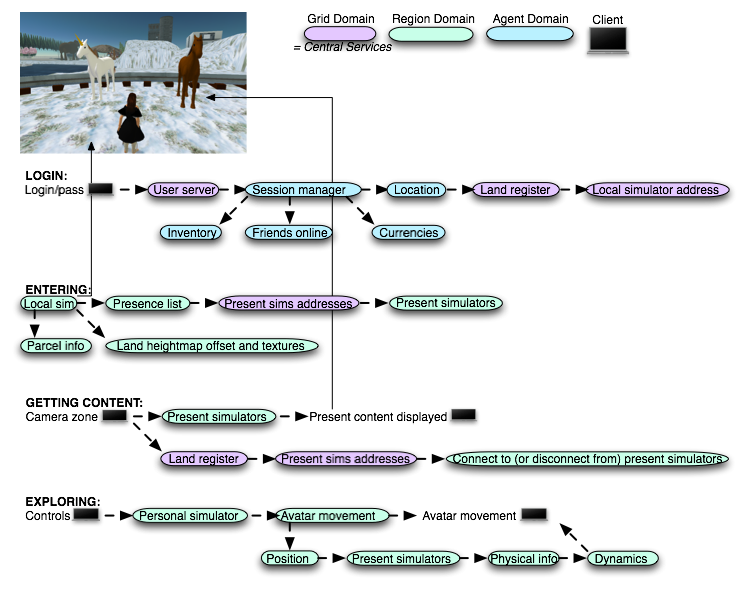