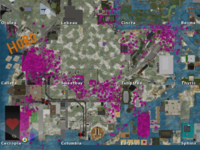 A large-scale griefer attack in Calleta City. All purple dots are self-replicating objects.

A griefer is a name for a Second Life Resident who harasses other residents. See the "Griefer" article on Wikipedia for more information on this topic. Griefing is a violation of the Second Life Terms of Service.

Some of them are limited in size and might affect only one or a small number of residents:

What happens to a griefer?

Griefers don't get away with this. The punishment they take is not made public, but as recorded, it usually includes access suspension and in some cases their account might be terminated. Even so, the problem is that they return with new, alternative accounts. In 2010, Gridsurvey published an incident chart and we can see there that the action token was usually an account suspension, but not only.

It is recommended to file an abuse report when you see a large-scale griefer attack. If nobody does, Linden Lab will not know about it. However, not all that looks like a griefer attack is really intended to be. For example, there have been recorded cases when a resident had a inside a wearable object script requesting to animate others.