Het-Grid is short for Heterogenous Grid, a grid for which there is more than one version of server code running at the same time. Different versions of the server code may change which features are available on a particular region. Examples of server side features include how scripts are interpreted and run or how physics is simulated. This means that your viewer may play well with certain features, but not be able to access other features.

Viewer versions are different from server versions. The "viewer" is what we call the client application that you download onto your personal computer. The viewer is responsible for client side features such as drawing everything your avatar sees on your computer. The server is responsible for simulating how your avatar plays with other objects and avatars in that region. 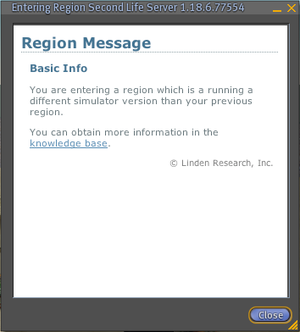 The possibilities of having multiple server versions on the grid is important to residents of Second Life because depending on which region you go to, your experience may change. You will receive a notification when you enter a region with a different version than the region you came from so that you can judge for yourself whether or not you want to stay in that region. Beta regions are running versions that are being tested. If you enter a beta region, you may experience a significant difference in performance, so it is important to read release notes on beta regions before doing anything like inventory access.

Regions refer to the 256x256 square meter of land that represent a block on the Second Life Grid.

A simulator is the process that runs one region of the Second Life Grid.

What are simulator hosts?

A simulator host is a machine that can run multiple simulator processes.

What is a viewer?

The "viewer" is what we call the client application that you download onto your personal computer.

What is a server?

The "server" is what we use to describe either the simulator host or simulator process. It is responsible for simulating how your avatar plays with other objects and avatars in that region and does the handshaking and communications between other regions and the data store that keeps your avatar's information alive.

How are Server Versions different from Viewer Versions?

What is a channel?

How are Server Channels different from Viewer Channels?