Properly named adjacent regions, mooring mast and seaplane harbor added. One guess as to what will be placed on Hub Island! 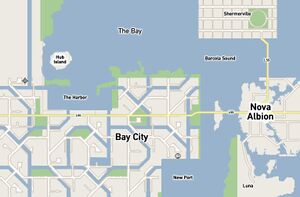 Bay City names, thanks to your suggestions! Also notice red parcels indicating the location of unique builds as well as green parcels which are the low-prim parks that contribute to the double prim nature of resident-owned land. 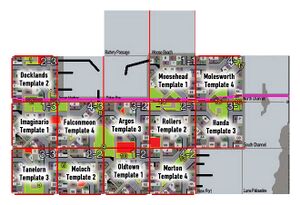 A look at the final distribution of Linden infrastructure in Bay City with black representing roads, sidewalks, back alleys and other bits of city stuff. The red line shows public transit and the major thruway to the old city. Note the nod to Roosevelt Island complete with asylum... 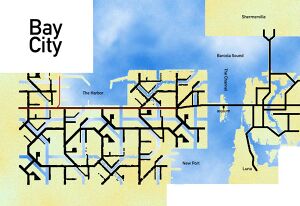 The first version of Bay City showing parcel planning. As these Regions will have double prims, just over half of the land needs to be held by Governor Linden. The colored parcels shown here represent roughly 47% of the land, most of which will be made available for auction. 1-2 parcels per Region will be reserved for Unique Builds or for parks/social spaces. 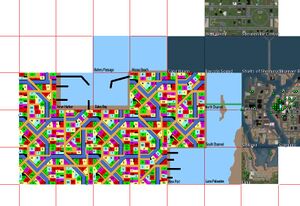 The design was meant to be more of an east coast / old european layout in that the roads have an almost random, evolving (paved horse path) feel to them. In my experience, this makes for the most interesting and "discoverable" neighborhoods. Roads that are laid out on grids as they are in LA and other modern, planned cities don't inspire quite the same sense of adventure or exploration. 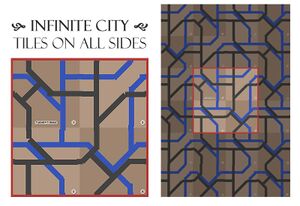