Three routes; now named 12, 13 and 14 exist on the Nautilus continent (near, but not the same land mass, as the city of the same name): 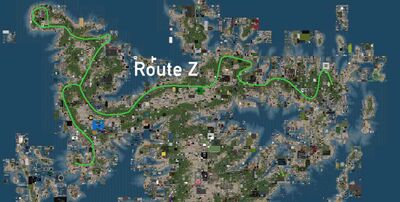 Route 12 is made for exploring from sea to shining sea, from the sandy beaches of the shore to the grassy hills of the interior to the rough mountain trails of the northern penninsula. This road is calling out for adventurous avatars looking to explore a continent.

Along that way you will find billboards like the one here. These maps give a topographical overview of the continent and the road itself. A red star indicates your current location. The gold stars indicate points to which you can teleport. Touching the gold star will open the map. This give explorers the ability to easily navigate to parts of the route not yet explored.

Close to the shores of the southwestern penninsula the rest stop in Beatrice is spartan. Little more than a few trees and a bench it is a turn around point and place to sit and contemplate which part of the continent you want to visit next.

The interesection in Dreyfus is nestled in the green hills of the continent. West is the road along the western shore to Beatrice. North is the climb over the hills toward the hairpin curve in Jaxipun and on to the off road trail on the northern point.

Just over the bridge in Elsa is the end of paved road. The rest of RT12 to the north is an unimproved dirt trail with steep hills, rocks, and undergrowth blocking the way. A pleasant walking or horseback riding trail the route is not recommended for large vehicles with a wide track or low clearance. 4x4 trucks and off road vehicles should do fine. Test your offroading skill on this one!

In Pouncival RT12 double backs on itself as the trail from Clinker snakes around the hilly terrain that makes up the northwest penninsula. To the north is a hill that will give even the best SL 4x4 a run for its money as you try to navigate around the switchback of boulders strewn in your path. Crest the hill and you're on your way through around the circuit of shear drops and undulating hills and back around to where you started.

The only other crossroads on RT12 Donalbain is rougly the halfway point. To the south is the short route leading to the endpoint at Camorro.

Endpoint of the southern branch of RT12 from Donalbain.

Rest point between the western half of RT12 and the east, Fenstriano is a good place to take stock in your transcontinental journey.

Final endpoint of RT12 in the east. Now to decide if you telport to another part RT12 or do you once more navigate the hills and curves backtoward the west. 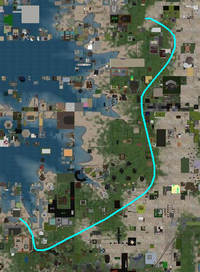 Route 13 is a small Route approximately 2.4km long. It begins in the mountainous regions of Borland Fell, Mysten, Frenscent, Fieldore, Siliconicus, Baddest, Servo, West Helsen, Phasmogore and Effingham and ends in the lower ocean areas of Kings Bishop and Omanix. The Path traverses very winding landforms which vary in elevation creating a very interesting and fun route. Great for taking your Bicycle or Horse for a ride, however it may be too much of a challange for larger vehicles.

There are Three Rezz Zones along the Route :

One at the Mountain end in Borland Fell.

One at the Beach end between the path and the boardwalk in Omanix.

One at the border of Siliconicus and Baddest on the Siliconicus side, around mid way of the route. 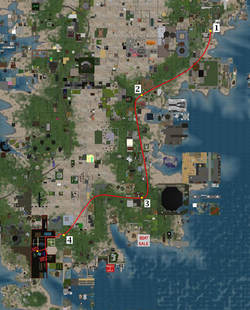 Nearly lost and forgotten, Route 14 is a slice of days gone by. Once dubbed "The Pixel Highway" this road once ran all the way to what is now Route 12. The Pixel Highway connected communities in the far north with those in the deep south in the days before teleporting. Today, Routes 13 and 14 are all that remain.

When the old Route 14 roadway was rediscovered, the survey Moles were shocked to find it buried underground still in remarkable condition. Made of red brick, they believed it would be a shame to cover such handiwork with asphalt. Instead, it was decided to restore it to like new condition instead.

Route 14 only passes through 12 regions from Speedstar to Mirandirge and is perfect for a short daytrip. Pack a lunch and explore a bit of history* as you go from the End Of The Line Inn to Sandy Trunks Beach... or vice versa. Along the way you'll cross Seven Chickens Bridge and Dead Mole's Curve. Be sure to stop and read the markers as you pass by.

Added on in 2012 the 3-N-1 extension was added on by the builders at The 3-N-1 Club. Although it is privately owned land, it is open for public use. 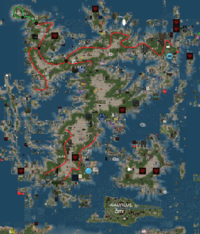 The following numbers are distances, measured in kilometers. Estimated error is 5%.

For Nautilus City, data is less accurate. There are many roads, paths, squares and stairs, so it is impossible to make a complete measurement. In East, there are many trails of protected land between parcels. Still, with a 30% approximation, the data is as follows:

Nautilus - main article about the continent