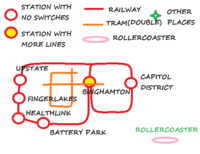 The railway connects 9 sims and has 6 stations. It is made of two major rails. Also, there is a tram system and a rolley-coaster forms a smaller, isloated rail system.

Binghampton is the central station and is the only station with more lines. It actually has 3 lines. It is very interesting building, in the style of the 1920's. There, you can always find trains waiting and also automated trains for public. In center of the station, on line 2, there is a place where everybody can rezz a train.

These rails have no functional switches. They use the same guide system that any Heterocera railway uses, so any regular train can operate on them without problems.

West Line is the largest brench, that travels through 6 sims and has 4 stations. All stations have a single line. There are a few interesting bridges. To South, this line is close to the East line, creating a short double line. To North, both lines share the same track.

East Line is short, passes through 4 sims and has only one station.

Near the central station, any traveler can see a bridge over the railway and a tram moving on it. There are two double rails for trams inside the Southern Tier New York sim. The lines continue a few meters outside of the sim.

The tram lines have the same wide with Bay City tram, but are very different. A classic train cannot use their tracks.

Unshown on this map, there is a rural tram that connects Hudson New York with Tribrough New York. It is unconnected to the railway system. The line looks rusted. A tram is visible at one end of the line.

There is a special track in South West, inside sim Soho New York. This rail is operated by a special vehicle.

There is automatic transportation on this railway. Trains move on both lines, stop in all stations and then return to the central station. Automated transportation is also on the tram line system. What is interesting there is that a tram is rezzed at one end of the rail, then it travels to the other end wnere it vanishes. Trams have a much slower speed then trains.