An Avatar is a representative of a real person in the virtual world.

The word is derived from the Sanskrit. There Avatāra means "descent", which refers to the coming down deity in earthly spheres.

Specifically related to Second Life is an avatar, the character you can dress and move. While most avatars in Second Life are human, this form isn't required. It is also possible to be an animal, a furry, a tiny, a demon, a robot... Even a flowerpot or rock. The only limitation is your imagination.

The default avatar in Second Life is named Ruth. 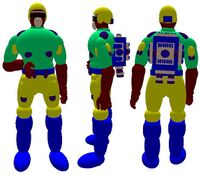 Primitars were the avatars in the early stages of Second Life, when it was still called Linden World. A replica of the primitar is available for free at the Historical Museum. The following video features such a primitar.