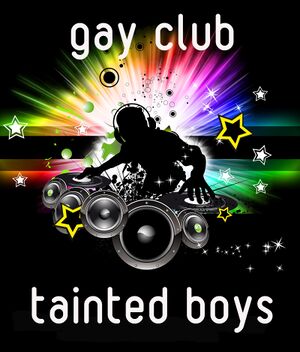 Tainted Boys is a gay orientated, open minded group owned by Adonis Lubitsch and Trace17 Junkers. On the group owned land, a half SIM, you will find a club and a mall with 45 shops.

The main aim is to provide their guests with enjoyable and various party's at a modern club, designed by its owners.

The club and mall are open 24 hours a day. A music stream is running always when no DJ is having a set. Beside live DJ's there are also themed partys with contests, fundraiser and live musicans.

Tainted Boys has two owners, which are Adonis Lubitsch and Trace17 Junkers.

There are currently 4 party's a week at club Nightlife. 6 international live DJ's provide the guests with the newest pop, dance, trance and house tunes. The club is open for guests everytime and a stream is always running, so you can hang out there with your friends whenever you want.

Tainted Boys was founded on the 26th April 2008. Over the past years Tainted Boys moved several times. Currently it is located at Pure Romance Isle(touch to teleport).

At this place, the history of Tainted Boys starts. The group got founded and a small club were built. There are hardly existing pictures from this time. From the beginning, Tainted Boys wanted to have a club and a mall, which the owners started building by their own.

Here Tainted Boys had a whole SIM. Beside a shopping area there was also a big club called 'New York', a beautiful garden and a nice beach. Several activities were for the guests to enjoy. You could fly around with an ballon, make water ski, sit at a camp fire or explore the SIM by feet.

At this place you could find a street with shops and houses above them. Later a café and an info center were built. At one of the big skyscrapers you could rent an appartment.

After several month, the street look got removed and a farm was build. As for the club, there was a greenhouse which also was a place to relax when there were no partys.

Not moving but rebuilding this time without any shops.

Due to performance problems Tainted Boys moved from this SIM.

Below you will see a list with all current staff members in alphabetical order and their working days. Touching a name will open their Second Life Profile.

Tainted Boys on the web