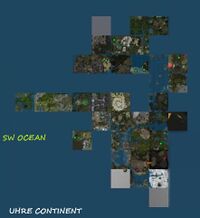 Uhre is a private continent, owned probably by a single estate. The name comes from the fact that the majority of the sims share the Uhre name. This continent has Water, but it's anything else then a tropical beach paradise.

The highest mountain is certainly higher then 130 meters (many high peaks are over 100 meters here). They are not always real mountains, many of them are sculpted prims. In many places, flying is not allowed. If the mountain has a very high declivity, climbing is not possible and altitude could not be measured.

There are also skyboxes, sometimes as large as an entire sim, with unexpected wilderness worlds. You might find even underground places like Caves & Mines. 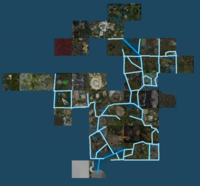 Road efficiency index is estimated to be 3.000.

Uhre continent is full of incredible middle-age and fantasy landscapes and themes. Many sims are created for roleplay. To travel this continent from one end to the other, is a real adventure.

The Coordinates are given in longitude min-max / latitude min/max format, like every sim has coordinates. They are available at Gridsurvey [1] or inworld from detectors.

REGIONS OF THE EMPIRE OF UHRE

Here is a summary of the other long standing regions:

Here is a summary of Uhre's Maritime Regions: