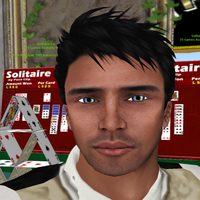 Born to start a project with a friend, name removed on request. Purpose was to start a new game room but we bought Romany Zyngo from Amandita Alphaville. Acquisition was ~L$90,000, mainly 48 Zyngos and some other games and contests. Place had rented a 8,192m parcel in Ferraris Estates 11. Game room grown up to use 1/2 SIM. We worked together till mid of August 2010. Romany Zyngo was then closed.

After some thoughts and requests I've restarted with a similar project, Roman Games, in September 2010 on previous place. Later, in November 2010, game room moved to a owned Full SIM (Roman Empire), not far from birth, just two squares East. This project is still running and alive...

Besides games being Instant Win a player also enter the following other contests for FREE:

As a side work I've been developing some LSL scripts, databases and data analysis resources to support several informed decisions. Those included using languages like LSL, php, MySQL,...

I am always very busy but still I placed myself as LSL Mentor and Scripter. Sometimes a good way to learn is helping others...

Pages that I am using as reference to build this up...