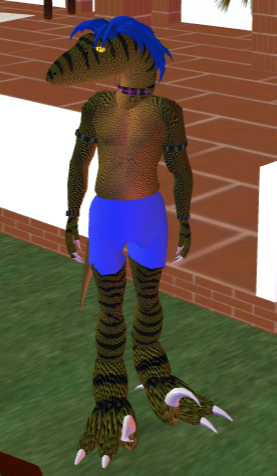 A dinosaur, usually an anthro-raptor. However, he can also be a full raptor, more like out of Jurassic Park, or a very little Comsognathus. When using the anthro-raptor avatar he also has a blue mane. His clothing is sometimes a space armer and more recently has been some light blue swimming shorts that he made himself.

He currently owns a bit of land at Promissa which he shares with Duragan Howton, his other friends can come and go as they please and use the land for building as long as they clean up after themselves.

As there is a large open area on his land and the sim is usually very quiet, he also doesn't mind holding small events, like parties for people.

He enjoys chatting with friends, exploring and scripting, sometimes builds things too, and like to experiment with what he builds.