Zindra is the "Adult" continent, and contains an extensive network of roads of an experimental road design, so drive carefully and keep your eyes on the road, if you can !

Unfortunately, until December 2013, the continent is still unfinished. This means that an important road in South is not connected with the rest of road system.

Roads in Zindra have a different and much modern texture then on other continents.

The roads of Zindra are usually built at the separation line between sims. This is visible, there are obstacles on the middle of the road to make the sim transition visible. A driver must be careful not to make too many sim crossings while moving left-right on the same road. The road syetem is well developed in Kama City, where the road system divides the urban area into sim-size squares. There are modern light stop signals at every intersection (but nobody will get a bill to pay when driving on red). Even inside the sims, there are paths made of concrete. Urban roads are continued with paths of Protected Land. They are covered with trees, but still vehicles can use them. East to the city, road system is still well-developed. South to the city there is a long beach road built of wood and with bridges over navigable routes.

Kama City has also a monorail that covers half of the urban area. 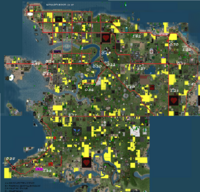 The following numbers are distances measured in km. Maximum estimated error is 5%.

Zindra - main page about the continent