This route loops away from the main highway at the Durango bridge on the Amundsen Road and crosses the Grindlewald River, travelling through the mountains to Zermatt Ice Lake via a choice of routes and passing a ski slope on the way. 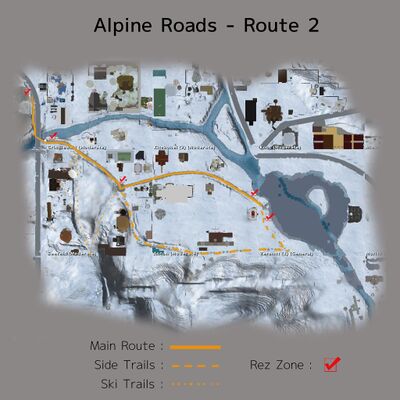 Alpine Route 2 diverges from the trunk Amundsen Road at a location previously thought to be geographically inaccessible for striking out towards the ultimate goal of reaching Zermatt Lake. A rez zone here precedes a sharp descent down the side of the gorge, passing alongside the structure of the Durango bridge itself.

A stone flagged shelf on the valley side appears to precede a dizzying precipice, however a luminescent yellow sign invites you touch it .. and lo ! ... a path of glowing light appears, curving away through the air across the gorge. Stepping out, you cross .... but don't tarry on the way, because you do not know how long it will remain, indeed, it begins to flicker ..

Safely on the other side (hopefully), you find yourself on the bank of the mighty Grindlewald river, rushing through the deep gorge it has cut, and roaring its way over the falls. Your road passes through a handy rez zone on the river bank, allowing transfer between road and river if you wish, then curves up and away towards the higher mountains,.

Gaining altitude, you pass a steep gully rising into the mountains, signs of sledmarks and recent mishaps on some hefty log barricades

The road emerges into a rez zone sited at a stone flagged junction, where three ways now present themselves : to the left, the road strikes away through the trees, while straight on, a cobbled trail rises up a slope, and to the right is ... a ski slope !

A tree stump indicates a fast way to the top of the slope, otherwise it's a long and arduous climb through the snow laden trees....

You find yourself atop a vertiginous slope .... a small silver and blue sled beckons ..... a slope plunges down and veers to the right towards the distant square, while a second slope cuts away sharply to the left, maybe you can reach one to that too if you slew the sled hard enough.

Otherwise, turning left from the square along the flagged road, you travel along a residential avenue, which stretches away from view straight as a die, before finally heading off to the right in the far distance.

Eventually the highway emerges from the houses and runs down to the lakeshore of Zermatt Lake. There are many attractions here, vehicles to ride, snow sports, hot food and a viewpoint for the Aurorae Lindenalis. This area has a rez zone too.

Another rez zone is present here, beyond the wooden pier. In a suitable snow friendly or off road vehicle you may reach here by driving carefully inshore of the walkway. Hoverboards are also available here if you wish to play on the ice lake at speed ! The snow laden lake shore is wooded with pines, and barely suggests any right of way here except for a few exposed stones, and lamps shining dimly in the distance. Perhaps worth striking out off road ?

The other option at Seefeld Square is to continue straight on up the cobbled slope. The trail runs along a narrow shelf, passing gullies rising high into the mountains perhaps cut by small glaciers long since melted away, and too sheer even for sledges to attempt. Drive carefully here, you don't want to end up in somebody's garden pond !

Following the trail further, you pass between tight packed cabins, before descending away from the general habitation past stands of pine, straight on towards the distant lakeshore.

Beside the lake, a small campfire next to a tall wooden post (which appears to be of great interest to the circling birds) reveals a few items of interest amongst the greenery. The trail appears to thin out here heading into the wooded slopes, perhaps worth following as you make out some colourful attractions further along the lakeshore.