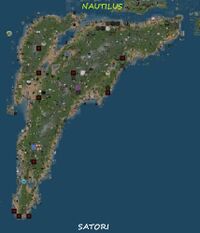 Satori is a mainland continent. It was first created as a Japanese continent. Today, the population of this continent is worldwide and the most spoken language is English. This continent has many sims woth Slavic-related names (many are Russian names). Their transcription in Lathin alphabet can be very confusing for a person who is used with Cyrillic alphabet. Satori is linked to the North with Nautilus and to the North-East with Blake Sea. The continent is made of a large mass of dryland. The road network is less developed and there are large places of abandoned land. Togeyher with Nautilus, Satori forms a megacontinent, like Euroasia in real world.

Construction of this continent started on February 21th, 2007. It was the first continent to be built in the East continental group. Construction ended on June 18th, 2007. This means a total of 86 days. Soon after its inauguration, work started on Nautilus. The daily evolution of the mainland continents can be seen here: [1]

Satori was connected to Nautilus by one of the Transcontinental Channels. After the creation of Nautilus City, it was completely linked and Nautilus - Satori supercontinent was formed.

The Coordinates here are given in sims, following the same model used by Gridsurvey [4] for the position of every sim. The numbers are: longitude (min - max) / latitude (min - max). There is no official geographic guide for Satory. There is a lack of geographical names. So, the coordinates are given here for diverse areas of the continent. Some sims have Slavic names (including Russian) and form the Slavic Region (note that they are only 30% of the sim names). Also, the border with Nautilus is not clear. 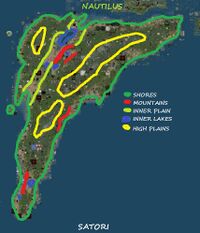 Satori is formed of high plains or low hills, something between Gaeta 5 and Jeogeot. This plain can be divided into 3 regions: Main Plains, High Plains and Inner Plain. Also, Satori has small mountain ranges and inner lakes. The ocean covers some coast sims.

The Main Plain covers 80% of the continental surface. It is not a smooth plain, however it doesn't form a coast (with little exceptions). The elevation rises from seaside (17 meters) to the inner high plains (100) slowly, without forming valleys, hills or platforms. This is a much more spectacular altitude difference then in Gaeta 5 but much lower then in Jeogeot or Corsica. Various residents made several terraforming to their lands. These terraformings are the cause of multiple terraces, platforms, walls and holes.

The High Plains are plateaus at some distance to the shores. They have an elevation between 95 and 105 meters and look like large plains. They have a different ground texture, so are easy to recognise.

The Inner Plain is a long sandy depression that hosts some lakes near the center of the continent. Altitude is low. Sometimes, if you dig 4 meters you can find water. This plain has some lakes that are not deep. The mountain range separates a smaller similar depression to the East.

Mountains. Satori has only one mountain range, with a maximum heigh of about 80 meters. It separates the inner plains to West and another smaller depression to East. They look a bit like the mountains of Jeogeot. The other mountains shown on the map are in fact plateau borders that look like hills. A touristic guide is available at Mountains Of East Continents.

The Inner Lakes are found in the inner plain (two, larger) and its Eastern depression (two, smaller) and also in South (one large and one small). They have the same elevation with the oceans, but are not connected with them.

Ocean Floor has a similar texture with Nautilus. 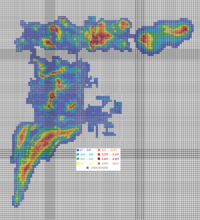 Even of on Geographic map Satori looks like a compact continent, the Altitude map shows a process of fragmentation. Also, it shows overall smoothness of terrain and unexpected elevation. The most interesting aspect is the fragmentation and the presence of depressions.

The inner plain is a large depression that separates the continent in two main blocks. It has a low altitude and if one day the ocean level will rise 15 meters, it will be flooded. Currently, parts of this plain are flooded. There are two gulfs at its border and inner lakes in its center. At a closer look, two small paralell mountain ranges (or hills) are visible in the South-East of the plain. There are lakes between the little mountains.

Other depressions are visible on the map. Satori has many endorheic lakes (see Water for more information). All lakes are at the same altitude with the ocean. Depressions that are higher then the sea level are not flooded.

The West part of the continent, separated by the inner plain, is smaller and has the maximum altitude of about 120 meterr, similar with the other high parts of the continen. It is fragmented into a main block and a smaller block in north-East. It is as wide as the East part, but much shorter.

The East part of the continent is long. It has the same width from North to South. If we take away the West part, the continent will be much sharp in North, as wide as it is now in South. The highest place is in Anushka sim, 128 meters, maximum altitude of all continent, but not much above the West part. Very interesting is that the the East part is further fragmented. There are small inner paralell depressions in East and West. In South, an endorheic lake separates the East part in two unequal blocks.

Altitude transition is smooth. Only on rare occasions, altitude changes fast from a parcel to another. This is visible on the roads. All roads of Satori take turns and are unconstrainted by Geographic obstacles to change their way. The most visible declivity is found in Bulyea sim, with the most dangerous shore. A maximum altitude of 128 meters place Satori as one of the lowest Linden-owned continent.

Altitude map shows many similar features between Satori and Jeogeot.

Satori looks somehow similar with South America on the map. Also, it is a relatively new continent, the same generation with Nautilus and Corsica. Also, many ground textures are common in these 3 continents. Since the construction of Nautilus city, Satori and Nautilus form together a supercontinent.

The roads of Satori don't provide access to all places. Many sims are isolated. The roads are not continous. Sometimes they are interrupted by a lake and sometimes they simply do not exist in one sim. There are teleporters that facilitate transportation through the gaps. This is good for an avatar, but difficult for a car. However, it is possible to walk across the whole continent on the parcels of abandoned land.

Navigation is possible along the coast (mainly in north, where a boat can easy reach the shores or Nautilus) and for the land owners also in isolated endorheic lakes.

Air transporttion is also important. Satori has its own airports.

Land With Restricted Access is rare. There are ban lines and entity orb teleporters, but their frequence is a lot lower then on nearby Nautilus or Corsica. satori looks like a good destination for flying.

Satori Network the roads of Satori