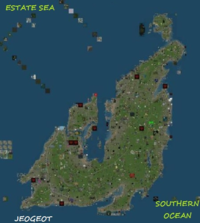 Jeogeot is one of the mainland continents. It was first made as a Korean continent. However, today the population comes from around the world and the most spoken language is English. Coastal regions are more populated, while in other, central regions (mostly in sims without road and water access) there are many abandoned parcels.

In the North-East corner, two regions are missing. They existed in early maps.

Jeogeot is a transition continent. It is the third historical mainland continent. The first two continents, which could be called The Old World, Sansara and Heterocera, have a high Geographic diversity, many types of ground textures and a complex transportation system. The continents built after Jeogeot, which could be called The New World, have a much lower Geographic diversity (a tendency for plains and low plateaus), less complex ground textures and a less developed transportation system. Jeogeot is somewhere between these two groups. The presence of large plains in South Jeogeot make it look closer to the second group of continents. Also, the percentage of abandoned land is similar to that of the New World. The lack of geographic and historical data might also place Jeogeot into the second group. On the other hand, the isolated mountains in regions like Somerset and Gorbash, as well as the Ichelus volcano make at least parts of the continent look similar to the Old World continents. The road system is not as developed as Old World continents, but is more complex than in the New World. The percentage of Land With Restricted Access is small, similar to Old World.

First sims of this continent were built in december 20th, 2005. The first part was the Northern island, then the continent expanded to South. The construction halted for a few months (spring 2006), until the South-Western part was started. In that peroid of time, the Eastern part of Sansara was built. A second stop was in spring 2007, when the continent still had the central sims unfinished (in this time, Nautilus and Satori were built. The last sims were added in march 19th, 2008. It is unknown when Jeogeot lost the two sims in North. A timeline evolution of the continent is available here: [1] 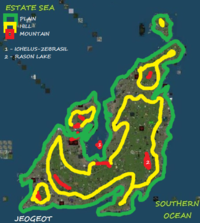 Jeogeot has hills, plains, and mountains. Also, the shores are of two types.

Plains are common along the coast. They are usually low altitude plains (up to 20 meters above sea level). Unlike the plains in Gaeta 1 and Gaeta 5, the altitude grows slowly from coast to continental center. Usually, the shores are smooth with many polders (artificial islands). The low altitude helps the residents on the coast terraform their land and build islands or channels. Many parcels are abandoned. The ex-owners used to terraform their land in extreme measures. Still, the existing terraforming presents obstacles (like walls and holes) to a traveler.

Hills are common in the center of the landmass. The islands in North and West have hills in their center. The hills are low so they are not an obstacle for a traveler. The main obstacle remains the old terraforming on abandoned land. Many abandoned parcels are in an advanced state of degradation. When the declivity is high, the abandoned land is made of small terraces. Usually, the hills have lightly greener ground texture then the plains. Also, sometimes the separation line between hills and plain is marked by some abrupt hills. The Rason Lake is a canyon filled with Linden water. A road passes just on the bottom of the lake, through a glass tunnel.

Mountains are usually isolated. The continent has some isolated peaks, easy to be climbed. Usually, the texture is similar to that of the hills. The declivity is usually of 30% and the mountains (except Ichelus-Zebrasil) are not protected land. Ichelus-Zebrasil is the only exception. The Ichelus volcano (see Volcanos) is probably the highest peak in Jeogeot (measured from bottom to top), even if it is close to the sea. The nearby regions have the most spectacular landscape in the whole continent. Not encircled on this map, there are the mountains in North, visible as a black dot, West of the Northern island. They are very dangerous mountains and very high, the highest place on the continent. They cover 3 regions. Between them, there is a large depression with a huge underground maze (see Caves & Mines or Mountains Of Jeogeot).

Ocean floor is covered with sand and small slopes. Oceanic vegetation is also present. The water is not deep. Inner lakes are at the same level with the sea.

Geographic features are not worked with so much attention to details like in Sansara and Heterocera, but they are more carefully worked then those in later continents. 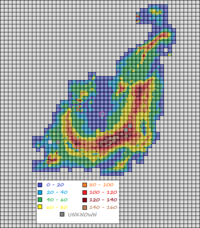 Jeogeot has a few similarities with Satori, Gaeta 5, but also with Heterocera and Sansara.

The Altitude map reveals many of its unknown secrets. The first thing to be noticed is the smoothness of plain and hills. This is very similar to Satori, where altitude transitions are almost always slow. Jeogeot has, in many places, a more visible altitude change near the shore. This is because the shores are more impressive here, but not always. There are places where shores are very smooth. Usually, altitude changes slowly from coast to inner land, in such a way that roads are not forced to take major turns, to avoid obstacles.

Like Satori and Nautilus, Jeogeot shows to have a central line with high altitudes, like a backbone. It has a semicircular form, around the central sea. This curved line is not necessarily formed by mountains, like in Heterocera; it is made of hills and plateaus, with low declivity. Altitude varies from place to place. At a more closer look, there is not a central dividing range on top of these hills. In the highest part (where the line has the widest area), there are visible multiple spots with altitude higher then 140 meters.

A large part of the continent is covered with plateaus, like in Satori, East Sansara or Gaeta 5. The altitude map reveals that in many places altitude changes are so low, that an entire region shares the same color. This is most visible in the North.

A common feature of Jeogeot and Satori is the fragmentation of plateaus. In the North, it is visible as a second line of high altitude plateaus (composed of two lines), parallel with the main line. Another isolated spot is visible in the South-West. The main high-altitude line is doubled by 4 smaller and incomplete lines. One, very visible and distant, is in South-East. Another one, smaller and closer, is in South. The other two are very close to the main altitude line.

The presence of parallel ranges of high hills and high plateaus means that between them there are many depressions. Sometimes, these long depressions can be considered valleys, but not always. Many of them, if an artificial rain will be created, will start to become lakes. Yet, there are a few endothermic lakes in Jeogeot, some of them don't have the same altitude with the sea. Similar lakes can be found in Heterocera and sometimes in Sansara, but also on Satori.

A few regions could not be checked for altitude due to script restrictions and simulator problems - not by restricted access.

The highest parcel on central continent is in Noul sim and is 160 meters high. There are many other parcels with close altitudes. The highest mountain, however, is at the North border, in South Forepaw sim, 178 meters. Flying is not allowed there, so it is a real adventure to climb the dangerous rocks. North to it, there is an incredible maze, with a lot of underground structures, covering the whole Pyri Peaks sim.

The Coordinates are shown in sims, in the same way they can be found for every sim from Gridsurvey [2]. The numbers are in this format: longitude (min - max) / latitude (min - max). Unfortunately, even if Jeogeot is the 3rd continent built, there is not a description with its geographic subdivisions. The Second Life Wikia (see link below) only describes 3 very small regions (Kantvanochtend, Baiivanochtend and Sleutelvankerk), in the North-East corner of the continent, leaving about 80% of the continent undivided. For Geographic reasons, the continental surface is split into some subdivisions, as seen below:

Jeogeot has some roads that form a continental network. The road system is highly developed, but it can be improved. Still, 26% of the sims have no road or sea access and those sims are the most uninhabitated. The road system includes two underwater tunnels and a lot of large bridges. Underwater tunnels can be seen also in Blake Sea (see Second Norway road system and Second Norway Railway) and on Caledon Railway. A second way of ground access is by walking on abandoned land parcels. Roads have automated transportation vehicles and many places to rezz your own vehicles.

Water transportation is done mainly on the central gulf/sea, where there are many flooded sims and many islands. Continental border waters are not always navigable.

Jeogeot has some airports and air transportation is done by airplanes or by flying. 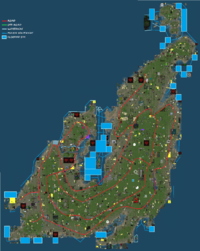 For more information, see Jeogeot Network and Waterways. Compared with other continents, Jeogeot has a better road transportation efficiency, but when we talk about Waterways, it is far worse then other continents.

Jeogeot is highly accesible for flying and walking. It has many parcels of Protected Land (roads, waterways). Land With Restricted Access, guarded by ban lines and entity orb teleporters exist here, like everywhere, but their number is lower, somehow similar to that found in Sansara or Heterocera. Our survey found no massive percel (more then 1/3 of a sim) to have restricted access. Since there are many parcels of Abandoned Land and Unused Land, it is easy to walk accross the whole continent. However, note that 30% of the entity orbs detected teleport without a warning message.