Gaeta 1 is an unfinished mainland continent. 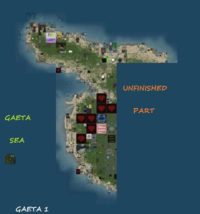 Gaeta 1 is the continent with the largest surface of abandoned land and directly-owned Linden land. It is not connected to other continents and its South-East part is unfinished. This small continent has no airport and only two small beach roads (in fact two paths). In East, there are sims of Linden Land, land that have never been sold.

The West and South parts of Gaeta 1 were built in a single day, june 4th, 2008. The North branch was built later. The South-East part is still unfinished.

Gaeta 1 is one of the smallest Linden-owned continent, saller then some private continents like Eden or Estate Continent.

Gaeta 1 is the most unpopulated continent. Even so, the amount of abandoned land is not big. The main reason for this is that a big surface of land was never sold and is still Linden land. Even if the road system is too small, the unsold parcels allow access almost to the entire continent.

Gaeta 1 is a large plain. It is the most flat continent. The North part is a perfect plain. In North-West peninsula, the most populated part, there is a smooth hill. The plain in South is more elevated, but still a plain. There are no depressions. High borders and obstacles created by terraforming can be seen from place to place, on abandoned land parcels. Sometimes, small slopes can be created from terraforming.

Almost all oceanic Water is Protected Land and is navigable. Ocean shores have a large beach of yellow sand and also the ocean floor is yellow. Sometimes, groups of stones can be seen under water. Unlike other places, ocean floor has no slopes or holes. 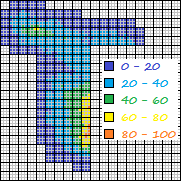 Altitude map of Gaeta 1 reveals the real shape of the continent. All the North part is smooth, with low altitudes, lower then any other continent. Only in the North-West peninsula, there is a small hill. Its presence was revealed by unexpected altitude. In South, there is a gradual transition from the smooth shores to higher plains. There is a clear evidence for an oceanic plain, continued with a higher continental plain. This feature is also seen on Gaeta 5. Altitude map confirmed that there are no mountains, no massive altitude transitions and no holes or depresions.

The most elevated point is 100 meters high, in Lemontal sim.

Gaeta 1 has only two very short beach roads. However, automatic transportation exists thanks to a small pod vehicle that travels across some unsold parcels. The continent has many Water sims and some ports, but navigation is less developed because there is no connection to another continent. Air transportation is also limited to the fact that an airplane cannot leave the continent and there is no airport.

The low population density is also an advantage. Gaeta 1 is a good place for free horse riding or for a land rover to explore. This is very easy in East. The oceanic waters in North-West are some of the most quiet seas on the grid, a good place for lonely sailing. 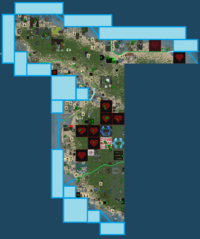 More info at Gaeta I Network and Waterways.

Land With Restricted Access is present in Gaeta 1. Our survey found an entity orb teleporter and a few ban lines. Since population density is very low, these obstacles are not a big threat for travelers and explorers.

[3] - from the old days when Gaeta was in construction