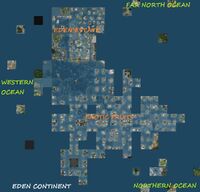 Older maps show a continent named Elimorum, home of Eldren people [1]. However, Eden continent is more to west then Elimorum was. Eden is private-owned and has many tropical islands, tropical beaches and a lot of seas to sail. The sims in North-West have all the name 'Eden' while the other sims are named after exotic fruits.

Eden Continent is in present the same size with Estate Continent and together they share the title of the largest private-owned continent. Also, Eden is the largest compact structure in all the West part of the map. It is clearly visible, even when map is at lowest resolution. This makes Eden the best orientation point after the large and compact mainland continents. As a result, Eden is the separation point for 4 grid Oceans: Northern Ocean, North - West Ocean, Far West Ocean and Western Ocean. And since Eden is between 4 oceans, it clearly is a strategic point.

In December 2013, Eden had 3 sims more then Estate Continent, sharing the title of the largest private-owned continent.

Eden Continent is a standard example of tropical beach paradise. The average altitude is low (under 20 meters). The continent can be divided in 3 main divisions: Eden Estate, Central Waterways and Fruit Islands.

Eden Estate has a higher island density then other places. The name comes form the fact that all sim names start with the word Eden. Access is allowed for everybody. Eden islands are all paradise-beach-themed.

Central Waterways have a small number of islands (or no islands). They are used for sailing and form the largest continental sea on the grid.

Fruit Islands are composed of tropical islands (various sizes) and waterways. In some places, there are round islands separated by small and long islands. The name comes from the fact that the sims have name with fruit origin. access is allowed for everybody, even if in parcel names it is noted residents only area. 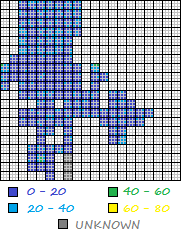 The Altitude map for Eden continent shows that the average altitude is below 20 meters. This is logical, if we think that more then half of the continent surface is under water. In 3 places, altitude was found to be higher then 20 meters. It is possible that also in other small parcels altitude is over 20 meters. For the Fruit Snowlands, data is unknown. Overall, the altitude map has many similarities with Blake Sea. The second highest altitude found by our survey was 38 meters, in Mango sim.

The highest altitude is in Raisin, 81 meters. This is the only sim where mountains can be found. Raisin mountains are placed in an uncomplete circle around water. the highest peak is in fact a volcano, while the second highest mountain is 79 meters high. The altitude map confirms that there are no other mountains on Eden, only a lot of paradise islands. 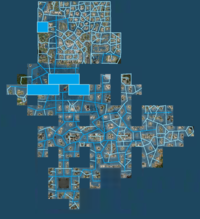 In Eden, we talk only about Waterways. In fact the whole continent is a huge waterway. So, Waterway efficiency index is 14.514, one of the greatest index on the grid. Along this continental water network, there are no ban lines, no entoty orbs and no other obstacles.

The new Fruit Snowlands have restricted access. The rest of the continent is opened for public access. We detected no entity orb teleporter. Ban lines, if they exist, are very rare. Anyway, access is easy by boat to every sim opened for public.