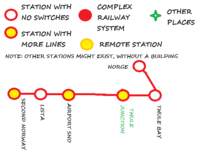 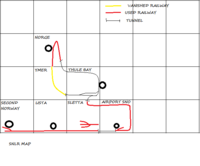 This is the most modern and by far the fastest railway in second Life.

This railway has a Norwegian name, Lufthavn. It is also called SNLR. However, many residents call it just Second Norway Railway.

For a long period of time, trains circled only between Second Norway to the airport.

In May 2014, only the branch connecting Second Norway with the airport is functional. The other one is closed and is being rebuilt.

The railway is located in Blake Sea. It is the only multisim railway in the whole continental block formed by Gaeta 5, Corsica, Nautilus, Blake Sea and Satori.

More then half pf the railway is underground, looking like a highly-advanced subway. The only surface sectors are Second Norway - Lista and the Norge area. In the airport, the railway goes through the construction. It is not a tunnel, but still it is not in the open sky. Also, very interesting is the fact that a large part of this railway is below water level, The trains are actually going submerged, but because of the high speed, you don't notice that easy.

This railway is not for regular trains. All trains are high-speed, automated and high-performance trains that run throuch a schedule. In every station, you can see when the next train will come. There are two trains. A red one circles from airport to Norge and a black one from Second Norway to the airport.

The speed is too high for regular trains and that is a big problem. Many residents don't survive the fast sim crossings. To increase your chances of survive, a good idea is to zoom into mouselook. Also, the trains have small stops at each sim crossings.

The following numbers are distances measured in km.

For the other branch, data is not available.