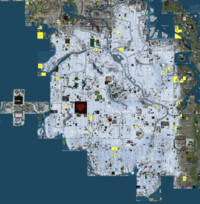 This creates confussions for Geographs, but it is much better to avoid fixing too many barriers and let everybody divide land as it is better for the moment.

Bay City, Snowlands Subcontinent or the Islanders in Sansara, Seychelles and Nautilus City in Nautilus, Caledon and Winterfel in Caledon - Winterfel, Linden Memorial in Corsica and not only.