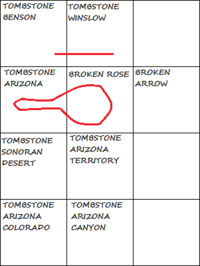 Tombstone Railway is the smallest multisim railway. It is located in Arizona/Tombstone Microcontinent. It passes through 4 sims and is formed of two distinct rails. It looks like they are made for different train models.

The North railway connects the sims Tombstone Benson and Tombstone Willow. It is not as large as a classic Heterocera railway, but it has visible, sculpted rails. A train is ready to go accross the sims on command.

The South railway forms a large circle through sims Tombstone Arizona and Broken Rose. It is not sculped railway, just drawed on prims. Distance between rails is smaller then at the North rail. No train was seen on this railway.

Automated transportation does not exist and these rails are not made for public trains to rezz. After all, they are in a combat area, where themed clothes are required.