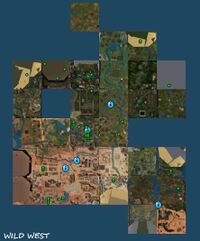 Wild West is the most western continent, close to the grid end. It is private owned. Recently (January 2014), it changed position from Grid Sector E12 to I11.

In past, Montana Animal Reserve was the only sim with direct access. If an avatar tried to visit another sim, the destination was a skybox. To have access to ground, an avatar needed to wear Western clothes and some special items. Now, access is allowed for everybody, but some sims still have a skybox for teleport entrance. Life on the continent is similar to the way Wild West was. So, many sims can be considered combat sims. Also, many sims are roleplay places.

All sims were initially ranked adult. Currently, many of them are moderate.

There are a few roads, paths and bridges, sometimes they go through caves, mountain paths or through fields and swamps. The best way to travel in Wild West continent is by horse, following the roads when you want.

Flying is not allowed in the majority of sims. Also, this continent is not a place for sailing, but you might find boats along rivers. 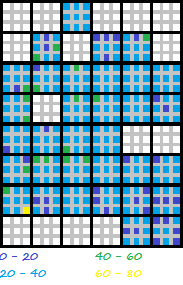 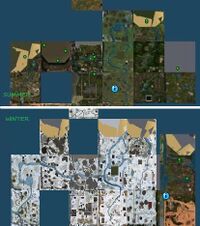 North part of in summer and in winter

The sims are named after states and places in the USA. The landscape varies form sim to sim. There are deserts, plains, canyons and forests. There are no oceans. In North, there are parcels covered with snow in winter (see Snow & Snowlands), while in South you can find deserts. Many sims are covered with vegetation and endless forests. Animals are also present and you might get followed by a buffalo or another animal.

Ground is not always smooth. There are rivers (sometime very deep), mountains (created by ground elevation or sculpted prims), the highest altitude (for ground elevated mountains) is in Mexico Sonora West, 79 meters. There are places where declivity is so high, that access is blocked forward. Other places are covered with hills, while others are smooth plains. There are even swamps and lakes. Some canyons are finished with small caves and there is even a mine (see Caves & Mines).

Coast sims (water and land): 29 (in fact, there are some rivers and only a few lakes)