Pyogp is an open source project to explore a suite of python based Second Life client libraries and to produce an automated testing framework.

See PyOGP Client Library Development Sandbox for instructions on the mechanics of working with the PyOGP package suite.

For a more comprehensive overview of working within the structure of classes and event systems in PyOGP packages, take a look at PyOGP Client Library.

client_proxy is now stable[1], though it's only logging things currently.

Note: I think the official repository got lost when bitbucket abandoned mercurial. I saved a copy of the 3 repositories: https://bitbucket.org/tapplek/ Tapple Gao (talk)

Another archive of the repositories that were non-empty in the softwareheritage.com capture: https://github.com/orgs/SL-PyOGP/repositories Kadah Coba (talk)

Pic of the Moment 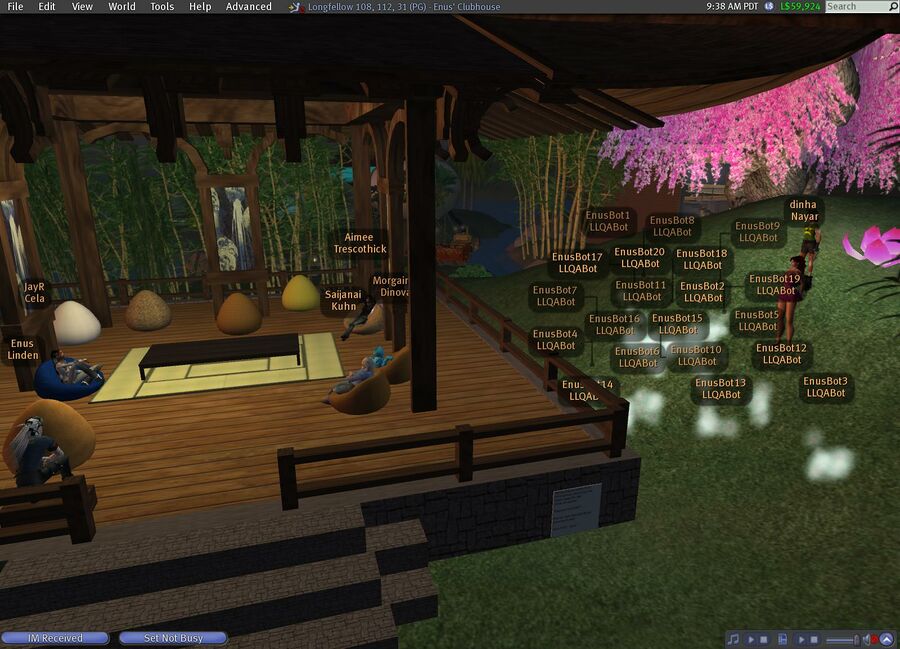 Image used with permission. Taken by Opensource Obscure. (thanks oo! <3)

Contributions to Pyogp are subject to Linden Lab's Contribution_Agreement. The Pyogp open source code is made available subject to the Apache v2 license. Read more at opensource.org and apache.org.

Linden Lab and the AWG (in-world discussion group page) worked together to develop a set of open protocols called the Open Grid Protocol that can be used to create a virtual world where regions are independently operated (not only by Linden Lab). The project aimed to allow people (organizations, individuals, and the like) to host their own regions in the virtual world and be able to interact and communicate with people in regions hosted elsewhere. In essence, the project's goal was to allow open-source region hosting.

AWG and Linden Lab plan to share the effort in writing a test harness that executes tests against implementations of the Open Grid Protocol.

The intent is not to test SL or OpenSim (or gridX) themselves. Rather, the desire is to create a framework where the implementations of the protocols can be tested in any virtual environment implemented per the Open Grid Protocols as documented. The goal is to use the test harness to test the implementations to make sure that the virtual environment is interoperable with the other virtual environments that have implemented the OGP. However, we also plan to test the current SL protocols (the Legacy protocols). We plan to be able to test at the smallest functional level possible, akin to unit testing, and to have the ability to use the framework to sequence steps to enable state specific tests to be run.

The longer-term vision is essentially a client library, capable of navigating the grid and interacting with the various hosts, sitting next to a testing framework, happily running along telling us what works where, and where something needs a little attention to work according to specification...

For more detail on OGP, see a visual representation of the upcoming projects and a general introduction.

Notes from the kickoff meeting

At the AWG meeting held April 29, 2008, we discussed what a test harness could look like that would be used to test the agent-domain, rez-avatar, and overall work being done implementing the open grid protocols. I'd like to summarize, and continue the discussion on the mailing list, in-world, and on the wiki. See meeting chat log.

How do we start?

Let's work on defining the test harness components (from the meeting):

Python seems to be the flavor of choice here, with a requirement that it accommodate non-python components as needed. The repository for the code is proposed to be maintained by Linden Lab, distributed as an open source export, under the Apache v2 License (see http://opensource.org/licenses/apache2.0.php). The process and details here are tentative, and need more attention...

There is plenty to be figured out. How to start, who wants to play, details are all TBD. My role is primarily intended as one who will facilitate dialogue and contribute as much as possible, but this is intended as a joint effort.