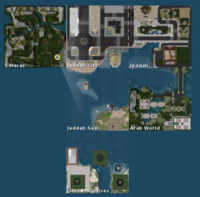 Arabian Microcontinent, also known with its transitory name A232, is a Microcontinent located at Coordinates 665-667/1087-1089, Grid Sector F10, Far West Ocean. This map structure appeared on maps from 2013 or probably even before, but because of its small size, it was not noticed by Geographic surveys.

Arabian Microcontinent is made of 6 sims: S Haras, Jeddah City, Jeddah, Jeddah Sea, Arab World and Isles Marquises. Majority of them are desert.

S Haras is an oasis, surrounded by mountains, with a horse ranch in its center.

Jeddah City hosts center of a luxurious modern Arab city, with steel and glass sky-scrappers, shining in the desert sun. Race cars can be seen on roads and palm trees are around the coasts.

Jeddah is another sim, part of the city, but with a bit more historical buildings, also well maintained.

Arab World sim hosts a huge palace, with its gorgeous gardens. With all its vegetation, it is like an oasis in the desert.

Jeddah Sea is part of a sea, with an island and a peninsula. It makes you think of a luxury station in Dubai.

Isles Marquises are a mixture of parcels, part of them with unfinished constructions.

This microcontinent is, with little exceptions, an extreme rich model of Tropical Beach Paradise. All, except S Haras, is covered with sand. Altitude is low (except again for the mountains found in S Haras) and ground texture resembles that of sand. Water covers nearly half of the surface and is sailable. Vegetation is tropical.

A high network of roads (and paths in S Haras) give access to all parcels in the microcontinent.

Of great interest are the buildings found here. They compose a City spread on 3 sims.

Except for parcels in Isles Marquises, access restrictions are rare. Protected land is present, along roads and waterways.

Land is owned by the same estate.