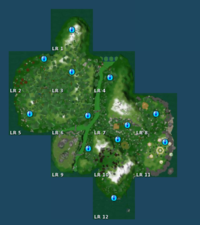 One of the RL microcontinents

The LR Sims (or A009, as their transitory name) are a group of 7 identical microcontinents (see Microcontinent. To East, there are two smaller ones (but when zoomed to minimum, it is clear that they have the same shape). They are placed in Grid Sector K11 and in L11, Eastern Ocean. Every microcontinent has an the same structure, 12 sims, all with a lot of green. On map, there are also two possible rivers, green. All sims have in name the letters LR followed by a number.

As seen on map, they are one of the most beautiful structures on map.

Access is restricted to this place, so we could not investigate them. This is strange, since there are a lot of infohubs and also a lot of people is there (as seen on map). From Gridsurvey, these sims are found to be rating general and to be mainland (Linden-owned land). This is one of the few Linden-owned places where access is not allowed for public. There are a few images on Snapzilla [1] for one of the LR sims.

It is possible that these sims are in fact places for testings. The only confirmation is the Snapzilla images. Also, the comments suggest that LR comes from Linden Research.

Very interesting is that, from time to time, part of (or entire) microcontinents vanish or are created. In March 20th, 2014, only 3 microcontinents and parts of other two were found.