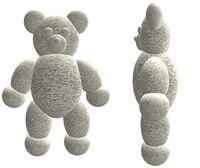 While all Linden Bears are special, this paragraph is for those who are given away to special celebrations. It's also for Linden Bears for teams of many Lindens.