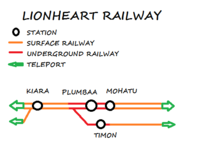 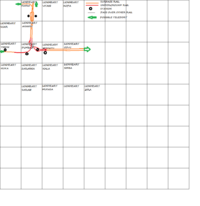 A018 (Lionheart) is a Microcontinent placed in Grid Sector E10, Far West Ocean. Its railway is very interesting because it hosts the most realistic subway stations.

The Lionheart Railway passes through 6 sims. It has the shape of a standard Heterocera rail and is electrified. It is composed of two main lines.

The Main Line is double. Central part is underground and looks like a subway, with a large central station at Lionheart Pumbaa. There is the connection with the second line. The line rises to surface at both ends. To North, it has a second station above ground. To South-East, there is no station. On surface, it looks like a modern double railway. Very interesting are the border signs, where the railway looks like going into the intersim void. Perhaps, they work like teleporters and vehicles can reapear at the opposite end.

In May 2014, main line was limited to Lionheart Pumbaa, due to the vanish of some sims.

The Second Line is simple. It starts at Lionheart Pumbaa and moves to West as a surface rail. It has its own subway station and a connection to the main line. Then, to West, the rail ends with a green sign, at the border with the intersim void. Then, somewhere in North, the rail appears back on surface (with a similar sign) and merges with the main line.

Unfortunately, the railway is not functional. A small train operates in the subway station, moving forward and back, but without getting to surface. There are also train blockers that limit access outside the subway area.

The link to Heterocera

There is a small railway in Heterocera that starts in Oculea and ends in a train depot at Lebeau, the Lionheart Depot. There, any resident can get information about the Lionheart estate. The Lioinheart depot and Lionheart microcontinent have the same owner.

The following numbers are distances, measured in km. Estimated maximum error is 5%.