Avatar Impostors can be turned on or off from the Second Life Edit menu > Preferences... > Graphics > [X] Custom > Avatar Rendering: [X] Avatar Impostors

Avatar impostors replace the rendering of an avatar with a cached 2D rendering (sprite) of the avatar. The sprite is updated only when needed, thus reducing the total number of full avatar renders and improving performance. 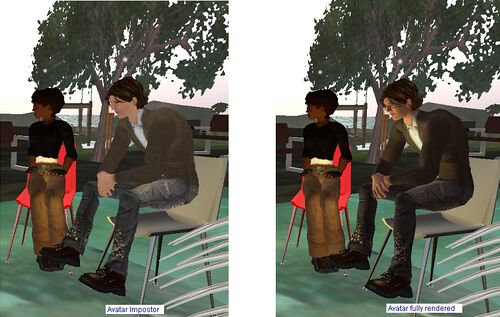 Suppose RenderAvatarMaxVisible was set to 100.

Relationship to other features

An attachment (at some distance) is visible with 50% transparency and disappears at 51% transparency. What are the rules?

Impostors are cutouts, not translucency, so anything the avatar is wearing that more than 50% transparent will not be rendered. The same thing happens for non-impostored geometry on a face-by-face basis for items that are very small on screen.

How can I tell if impostors are working?

Turn on Wireframe mode (ctrl-shift-R or Client>Rendering>Wireframe). Impostored avatar will not be visible as a wireframe.

The code for impostor update frequency is as such:

If that visible BOOL comes out TRUE for a given frame, that avatar will get an animation update. LLVOAvatar::sLODFactor is the value that comes out of the avatar mesh detail slider. mPixelArea is the number of pixels being covered by the AABB that surrounds the avatar and all of its attachments. If the AABB of the avatar hasn't changed significantly after an animation update, there is no impostor update (this prevents redundantly updating impostors for avatars that aren't moving).

There's no info display for impostor update periods or when an update is triggered. Would you like me to make one? It should be trivial to make impostors flash green on frames where they received an update and display the update period as debug text.