This article is about Land. For scripting (LSL) related articles, see Category:LSL Region.

This article is supposed to give an overview about land in Second Life, going from the smallest to the largest scale. 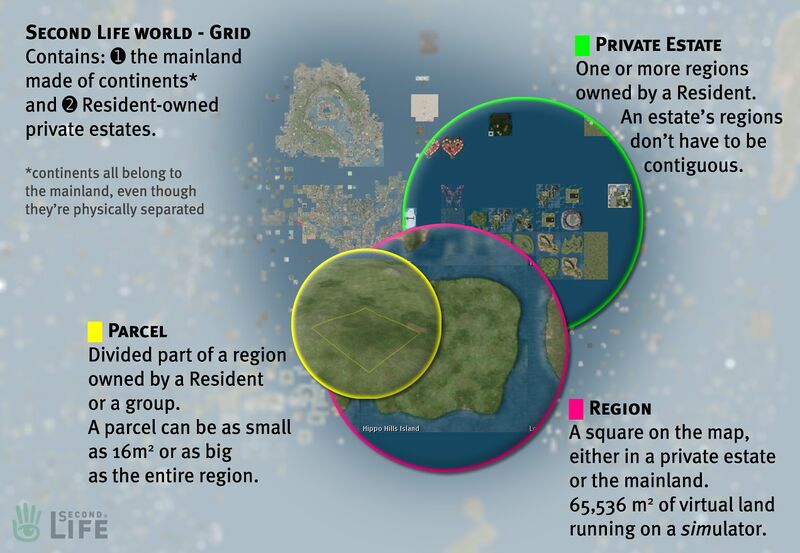 An area of land owned by a single user or group, which is at least 16m² and at maximum 65,536m², all within one region. Parcels are composed of square blocks measuring 4×4 meters, but the blocks do not have to be contiguous. Parcels have both an integer local id and a global UUID. Parcel settings are modifiable in the About Land options.

A named 256 m x 256 m (65,536 m²) area hosted by a single simulator process (sim). In common usage, the term "simulator" or "sim" may also refer to a region, but in fact a single server process can host multiple regions. They can be flagged as General, Moderate, or Adult.

There are currently three types of regions: Full, Homestead and Openspace (also known as Void). All have the same size, but differ in their avatar-, and primitive limits, as well as in their price. See Private Region Types for official info and Private Region for general FAQ.

There is one full region per server host CPU core. A region can hold up to 100 avatars and 22,500 Land Impact.

Homestead regions were introduced in January 2009 and are only available for Residents who own at least one full region. It can hold 20 avatars, 5000 Land Impact and the amount of running scripts might be restricted in the future.

Openspaces are, like Homesteads, only available for Residents who own at least one full Region. They support a maximum of 10 avatars and 1000 Land Impact.

A collection of regions with a particular shared set of rules, such as banned users, sun position, etc. Estates have integer identifiers. Read also Estate FAQ.

The Linden-designed continents (known as "mainland") are the largest connected land-masses in Second Life, consisting of hundreds of regions connected to one another with roads, railroads and open oceans. The “mainland” is estate ID 1 and owned by Governor Linden. Residents with a premium account can buy mainland parcels and need to pay a monthly tier when their land exceeds 512 m². See landpricing info. A mainland region supports a maximum of 40 avatars.

Private estates are collections of Resident owned Regions. Some of these Residents rent out the land inside their regions, and Basic Account holders can rent land from these residents without maintaining a Premium membership. See Estate Management and Private Estate Management Companies to learn more.